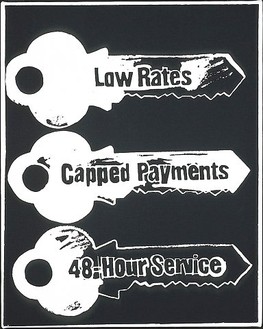 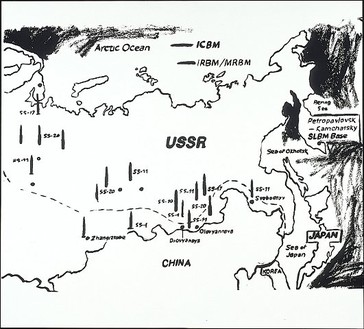 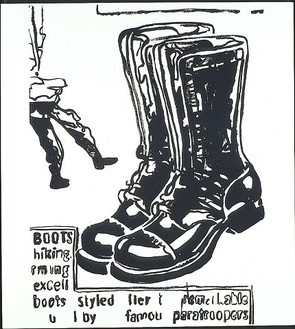 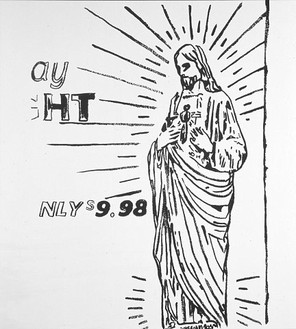 Gagosian Gallery is pleased to announce the exhibition in London of an important group of late Warhol paintings, which have not been previously seen in full. Additional paintings and drawings from this series will be shown at the New York gallery in March.

In the mid-1980s Andy Warhol made a series of large (72x80") and small (16x20") silkscreened black and white paintings of images taken from advertisements, diagrams, maps, and illustrations in newspapers and magazines. With images of Russian missile bases, maps of Iran and Afghanistan, and common consumer items such as sneakers, hamburgers and motorbikes, they have a continuing uncanny resonance some 15 years after their creation. Warhol's constant themes of consumer culture, death and religion are powerfully represented in these late works. The paintings are contemporary with the collaborations Warhol made at this period with Jean-Michel Basquiat and Francesco Clemente, which revitalised his interest in painting, and which are directly related to the early Pop paintings which established Warhol's reputation in the early 1960s.

Andy Warhol (1928-87) was born in Pittsburgh, and moved to New York in 1949, where he became a well-known fashion illustrator. In the 1960s his paintings, films and other activities established Warhol's Factory as the famous epicentre of radical creativity in New York. Since his death in 1987, the continuity and importance of his work overall has become more widely recognised, and The Andy Warhol Museum opened in 1994.

The exhibition is accompanied by a fully illustrated catalogue, with text and a 1985 interview with the artist by Benjamin Buchloh. The Gagosian gallery exhibitions coincide with the major retrospective of Warhol's work at Tate Modern, previously seen in the Neue Nationalgalerie Berlin and travelling to MOCA, Los Angeles.