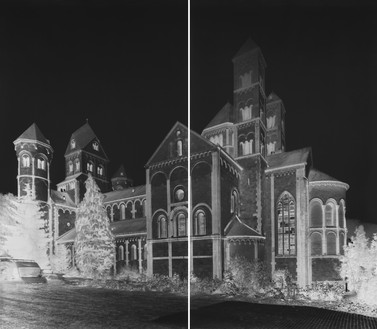 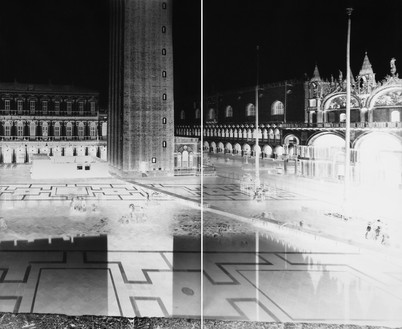 Nothing is solid in memory. Our minds only hold on to traces, outlines—and that is what my photographs portray.
—Vera Lutter

Gagosian is pleased to present Fragments of Time Past, an exhibition of photographs by Vera Lutter. This exhibition coincides with Museum in the Camera, Lutter’s solo exhibition at the Los Angeles County Museum of Art, which opens on March 29.

Since the 1990s, Lutter has used a camera obscura to produce large black-and-white photographs of buildings, landscapes, and urban and industrial sites. Reveling in the directness of this foundational technique, she produces unique prints, interpreting familiar panoramas as spectral images that prompt reflection on the inexorable passage of time. In Fragments of Time Past, Lutter presents six photographs of three different ancient and historical sites, imparting new and uncanny visual life to these iconic landmarks and relics.

Between 2005 and 2008, Lutter made several trips to Venice to photograph the city’s distinctive canals and buildings during the yearly acqua alta flood season. In San Marco, Venice XVIII: November 29–30, 2005 (2005), the geometric pavement of the titular square is immersed in shallow water smoothed to glossy stillness by the photograph’s extended exposure time. Lutter’s images create the illusion of solid ground dropping away, subsumed by the placid surface of the swollen Venetian waterways—visually suspending the city’s centuries-old facades above their own hazy reflections.

In October 2010, Lutter photographed the east and west facades of Maria Laach, an eleventh-century Benedictine abbey in the Eifel region of Germany. The resultant images outline the Romanesque sturdiness of the abbey’s towers and arches in stark photonegative grays and whites. By the same token, the building’s stone walls seem to dissolve into the dark sky framing them, leaving behind an architectural skeleton that is both fortress-like and surprisingly delicate, its once shadowy windows emitting a mysterious glow.

Lutter’s 2015 photographs of the ancient Greek ruins at Paestum, Italy, prompt a meditation on temporality and the survival or decay of built structures. For this series, she photographed the well-preserved ruins of Paestum’s temples to Athena and Neptune—both of which were constructed circa 500 BCE—highlighting the buildings’ weathered but enduring beauty. In Temple of Nettuno, Paestum, XXIV: October 26, 2015 (2015), Lutter tightly crops a seemingly endless matrix of stony slabs and sturdy fluted columns into a single vertical frame, suggesting a sense of the infinite that resides in present-day space yet simultaneously looks to the ancient past.

To make her photographs, Lutter repurposes everyday objects ranging in scale from a traveler’s trunk to an entire room, turning their hollow, boxlike interiors into pinhole cameras. The images she captures are inverted and projected onto sheets of photosensitive paper, resulting in otherworldly monochrome negatives. Lutter’s photographs—the outsize dimensions of which are appropriate to their subjects’ monumental scale—can take days, weeks, or even months to fully develop, gradually revealing eerie black-skied scenes absent of human activity and focused instead on architecture and open space.

In the interest of public health, this gallery is temporarily closed until further notice.