Four paintings by Brice Marden have been incorporated into a new dance commission based on T. S. Eliot’s Four Quartets, with choreography by Pam Tanowitz, and music by Kaija Saariaho. The performance will premiere on July 6–8, 2018 at the Richard B. Fisher Center for the Performing Arts at Bard as part of the SummerScape Festival. Gideon Lester, the Fisher Center’s artistic director for theater and dance, spoke with Marden about the canvases that form the set design. 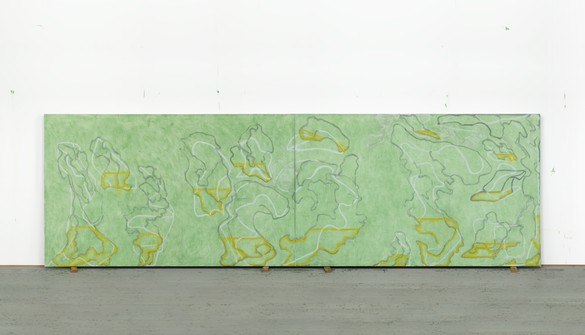 Brice MardenIt was probably in the late ’70s. I remember my brother had a book of Eliot’s works, and I was curious about what he was reading. I had a friend who was a restaurateur and dope dealer, who also taught English. We read the Quartets together and he explained them to me, but I wouldn’t say I’ve made a study of them.

GLI read an essay by [art critic] David Anfam in which he draws a parallel between your work and Four Quartets. He describes the “hushed stillness-in-movement quality” of your painting Ru Ware Project (2007–12), and quotes from “Burnt Norton”: “Only by the form, the pattern, / Can words or music reach / The stillness, as a Chinese jar still / Moves perpetually in its stillness.”

BMI’m glad he saw that, though I wasn’t thinking directly about Eliot when I painted it.

GLIn Four Quartets, Eliot is seeking to express an experience of the sublime. This seems to be a point of deep connection with your own work.

BMI’ve recently been doing all these green paintings, and have been working a lot with the pigment Terre Verte—green earth—and there’s so much reference inherent in these materials that I don’t think I’m putting all that much of myself into it. More and more, I find when I paint that I go sort of blank, as if I’m a vehicle. I’m at a point in my life where I’m reconsidering a lot of things, how I’m spending my time. That’s one of the reasons I took on Four Quartets.

BMThe whole collaboration thing. I really like dance. It seemed like a very good idea, the combination of poetry, dance, contemporary music… though I’m not terribly involved in music right now, or dance. Also I said “yes” because you made it difficult to say “no.” It’s Bard, and I’m up here, I’m part of the community.

BMI did a set for a Karole Armitage production of Orpheus and Eurydice in Italy, and lights and costumes for Baryshnikov, who was performing Cunningham’s Signals.

GLYou’ve talked in the past about the way that the physical action of painting has a choreographic quality for you. Your painting The Muses (1991–93) was inspired by dance, wasn’t it?

BMThat was more about madness. I had an image of the muses dancing wildly in the Peloponnese. There’s no depiction in my paintings, though there is movement, which could be associated with dance.

GLHave there been periods when you were particularly interested in dance? I imagine you encountered postmodern choreographers when you were working as Robert Rauschenberg’s assistant?

BMI remember that Merce [Cunningham] would come by the studio. Rauschenberg worked mostly at night, so I’d be getting ready to go home and all these people would start trickling into the studio at cocktail time. He was working with Deborah Hay, Steve Paxton.

GLThe two-dimensional nature of painting—the plane—is of great importance to you. I’m curious how it has been for you to think about set design, which is three-dimensional.

BMYes, the whole idea of flatness, and the tension between flatness and the illusion of non-flatness—a lot of that is arrived at by color. But for Four Quartets most of the pieces Pam and Clifton [Taylor, the scenic designer] chose are very architectural, and they can be broken down in an architectural pattern. 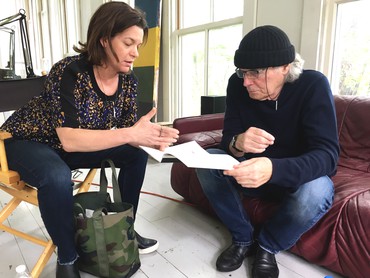 GlThe design incorporates four of your paintings, one for each of Eliot’s poems. Maybe we could talk about each of them. The first, for “Burnt Norton”, is a detail from a painting with four sections, called Uphill 4 (2014). What’s the significance of the title?

BMNothing. I have a studio here in Tivoli that’s up the hill. I refer to it as the uphill studio. That’s all.

GLI had an elaborate theory about why the title was perfect for Eliot’s poem. He has a line about “the figure of the ten stairs,” an image from the mystical writer John of the Cross, which imagines love as a staircase. So, uphill!

BMThat’s a very rich interpretation and it’s fine by me. That’s what happens when you put things out in the world.

GLAt the bottom of the canvas there’s a band where you let the paint drip down from the top. That sense of chance also reminds me of Cunningham and his collaborations with John Cage.

BMWhen I first started to show paintings, I did that a lot. I was making monochromatic paintings, and the drips at the bottom were an indication that they were handmade. It was at a time when a lot of painters were trying to make it look as though their work was mechanical, not made by hand. Later I stopped, though I’ve returned to it more recently with paintings like this one.

BMIt’s all about opposites. Green and red are complements, and I tried to complicate the reading of it with the orange and blue. I’m always trying to mix colors in a certain way. I used to be, if not radical, then at least contemporary, and now I feel that I’m much more conservative. I’m still working with these ideas of color.

GL“Thira” means door in ancient Greek. You use the structures of post and lintel doorways in a lot of your work. The form looks like Stonehenge, which isn’t far from the village of East Coker. Eliot writes about old stones, old structures, in that poem, so it’s resonant.

BMI was thinking about the ancient dolmens and stone circles from the Burren in Ireland. Also classical buildings in Greece, with their solid and open spaces.

GLThe painting for “The Dry Salvages” is much more recent; I think you finished it this year. Can you tell me about it?

BMIt’s based on ideas of rocks from Japanese gardens, but it’s also about numbers. It’s all very unresolved. I’m drawn to the idea of the scholar’s rock, the artist keeping a rock in his studio as a microcosm or macrocosm. There are three clusters of rocks in the painting, and there are yellow horizontal lines, which mark off two-thirds of each of the rocks. That’s basically what the Japanese do—they bury two-thirds of the rock, so it’s coming out of the earth.

GLOr coming out of the ocean, in the case of this poem. The painting fits perfectly. It almost looks like a map of the Dry Salvages, the rocks that Eliot was writing about. For “Little Gidding” we’re using a much earlier image, which you made in 1980.

BMStructurally it’s related to Thira (1980). It contains some ideas from stained glass window studies I did for a Basel cathedral.

GLAgain the connections are uncanny; Little Gidding is a chapel, and the painting could almost be its windows. Poetry has been an important source for you in the past. In the 1980s you created a series of etchings to accompany a translation of thirty-six poems by the Chinese poet Tu Fu, and later a group of large canvases, the Cold Mountain series (1988–91), inspired by the Zen nature poet Hanshan.

BMYes, I discovered Tu Fu through the translations of Kenneth Rexroth, who himself was a great nature poet. I got very interested in Chinese poetry. I also love Yeats. I love poetry because it’s apparently so simple.

Special thanks to Noah Dillon, Tyler Drosdeck, and Caleb Hammons; Four Quartets is co-commissioned by the Barbican Centre in London, and the Center for the Art of Performance at UCLA, and will be performed at those venues in 2019; For further information about Four Quartets, visit http://fishercenter.bard.edu/events/four-quartets/ 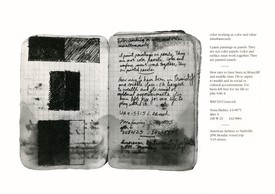 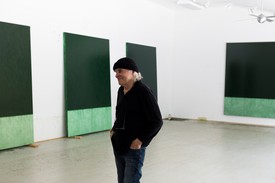 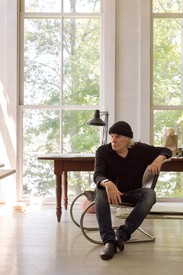 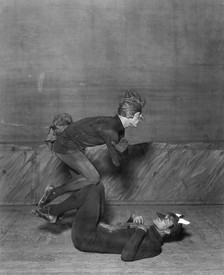 Gillian Jakab considers the legacy of Sergei Diaghilev and the Ballets Russes in light of contemporary collaborations between visual artists and choreographers. 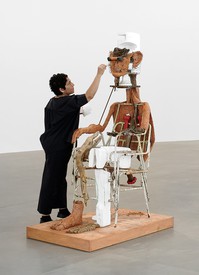 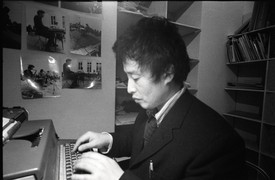 Earlier this year, MIT Press released We Are in Open Circuits: Writings by Nam June Paik. Here Gregory Zinman, coeditor of the book along with John Hanhardt and Edith Decker-Phillips, writes about his first exposure to the artist’s archives, the discoveries made there, and the relationship between Paik’s writings and his larger practice.