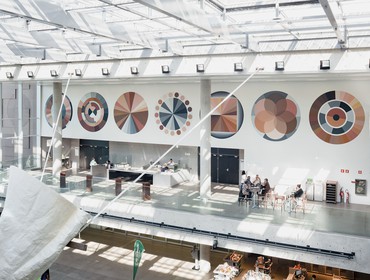 Adriana Varejão was commissioned by the community center SESC Guarulhos in Brazil to create a mural for the center’s entrance area. In the seven giant abstract color wheels that comprise Cores Polvo (2019), Varejão uses the abundant nuances of skin tone to address the complex issues of race and identity. The skin-tone shades featured in the motifs were inspired by a 1976 Brazilian government survey in which ordinary citizens were invited to describe their own skin tones in terms meant to replace the existing five previously established characterizations. 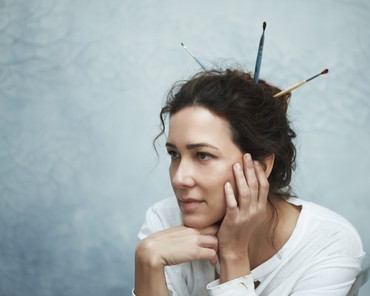 Adriana Varejão has been awarded the 2012 Prêmio Mario Pedrosa, bestowed by the Associação Brasileira de Críticos de Arte (ABCA) in May 2013 for her contribution to cultural developments in Brazil. ABCA’s mission is to promote exchange between its members and researchers working in the areas of art history, theory, and criticism, encouraging interdisciplinary studies and contributing to the sphere of visual arts and to the fields of education, science, and culture. 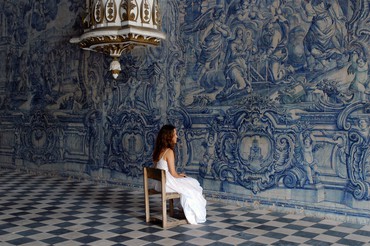 Adriana Varejão has been awarded the 2011 Cultural Merit Order Award in recognition of her contributions to arts and culture in Brazil on both national and international levels. Varejão will formally receive the award from the President of Brazil, Dilma Rousseff, at a ceremony on November 9, 2011, at the Teatro de Santa Isabel in Recife. 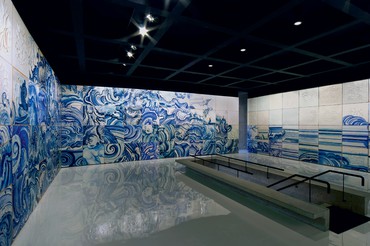 Adriana Varejão was named a Chevalier de l’Ordre des Arts et des Lettres by the French Ministry of Culture and Communication in 2008, on the occasion of the completion of the Galeria Adriana Varejão at Inhotim Centro de Arte Contemporânea in Brumadinho, Brazil. Established in 1957, this order is intended to honor those who have distinguished themselves through their significant contributions to the arts and literature in France and around the world. 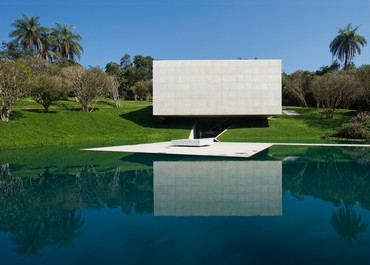 Built into a hillside to reflect the site’s original topography, the Galeria Adriana Varejão pavilion at Inhotim Centro de Arte Contemporânea in Brumadinho, Brazil, was completed in March 2008 and houses six major works by Adriana Varejão, four created specifically for the structure. The centerpiece, Celacanto Provoca Maremoto (2004–08), is a mural covering four walls, made up of 184 painted canvas panels—white-and-blue squares that re-create original tiles the artist photographed, depicting angels, wings, and other decorative motifs, as well as the texture of cracked tiles. Founded by Bernardo Paz, the open-air museum is made up of multiple permanent pavilions placed throughout a 35-hectare (86.5-acre) park.