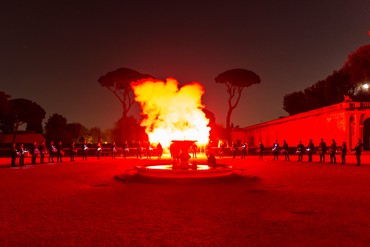 This is the third and final performance of the Roman Trilogy, which premiered at Villa Medici–Académie de France à Rome in 2002, and was performed there again in 2016. In this work Piero Golia uses language, performers, music, fire, and more to expose the public to a “total work of art,” or Gesamtkunstwerk, an unforgettable experience. During the event, Golia will leave a “sign” on the floor of La Fondazione, which visitors can view through March 21, 2020.

Solutions to Mortality is the result of Piero Golia’s Grafly commission at the Ulrich Museum. This commission invites artists to respond to the museum’s large collection of artwork by Charles M. Grafly. For his exhibition Golia has placed three works in the sculpture park of the museum: a cast of George Washington’s nose copied from Mount Rushmore, an upside-down statue of Garibaldi, and a section of the wall that separates Los Angeles from Orange County. 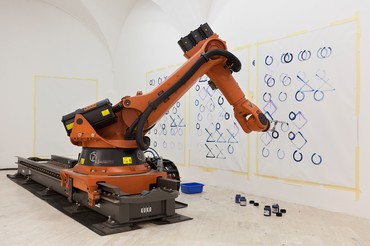 From the outset of his career, Piero Golia’s principal focus has been the theatrical and the conceptual in art, specifically supreme gestures and the completion of seemingly impossible acts. For this first institutional showing of his work in Switzerland, Golia will realize a new work developed specially for the Kunsthaus Baselland.