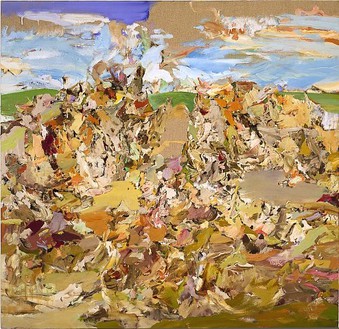 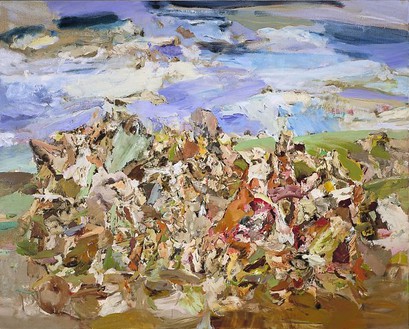 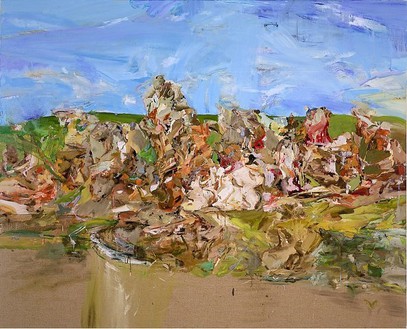 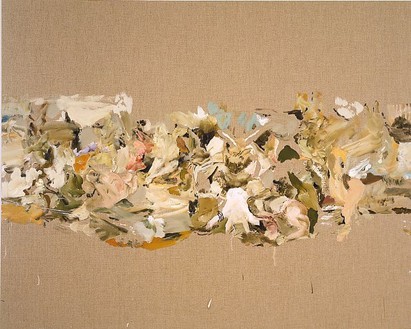 Gagosian Gallery is pleased to announce an exhibition of new paintings by Cecily Brown. Brown has produced a series of landscape paintings marking a significant departure in her oeuvre. In these notably smaller, more intimate canvases, Brown makes a dramatic shift both in her subject matter and her formal approach.

While her theme may be the pastoral, it is far from idyllic. Below the brilliant blue skies and set in-between the recognizable foliage are the frantic movements of both amorphous matter, which may or may not be human, and bacchanalian bunnies reintroduced here by Brown from her earlier work. At first glance these vague forms and barely discernable creatures rendered in thick, extensively worked brush strokes seem to be emerging, like the figures in her earlier paintings, from a similarly abstracted background. Yet upon closer consideration a distinct shift in Brown's approach to abstraction is revealed. Unlike past figures, which seem to materialize or even float within a similarly disembodied foreground, here her subjects are now unmistakably a part of a scene or scenery that places them squarely and concretely within a definite place and pictorial space. The result is a bucolic albeit fleeting moment.