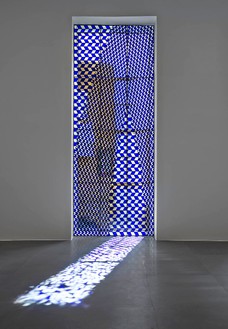 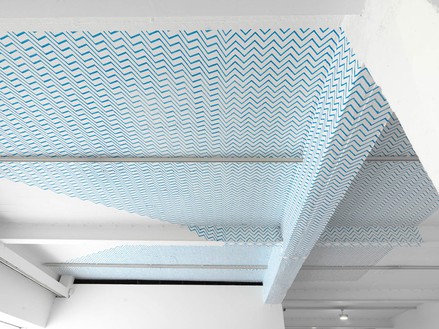 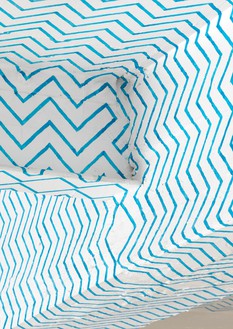 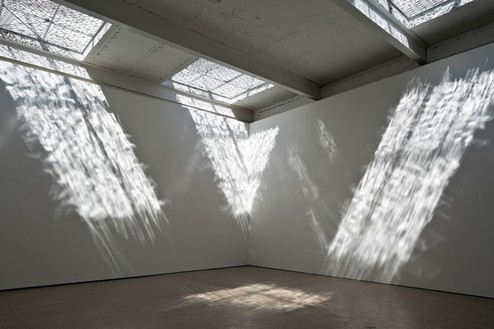 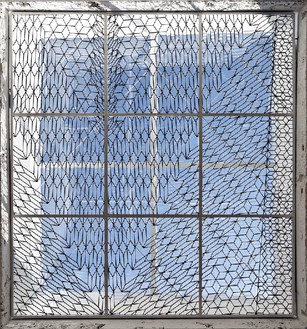 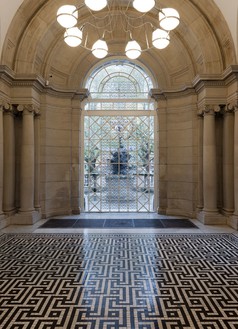 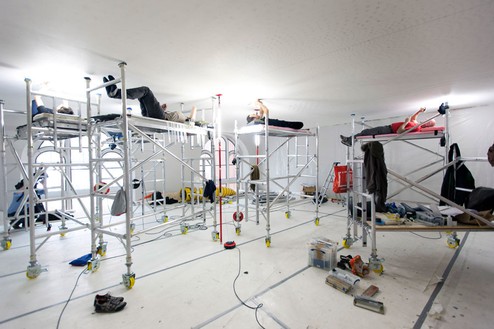 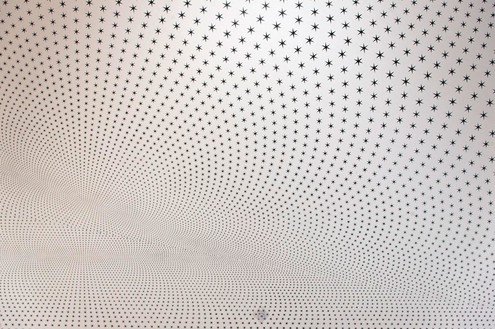 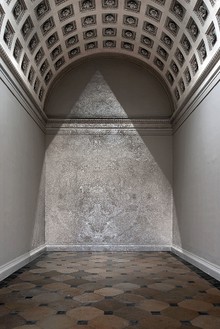 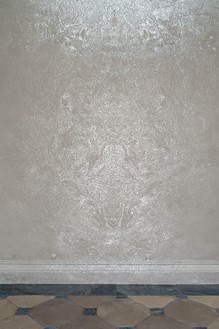 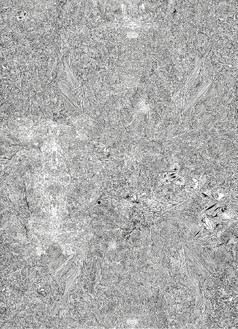 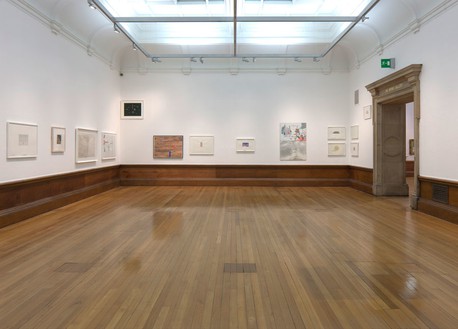 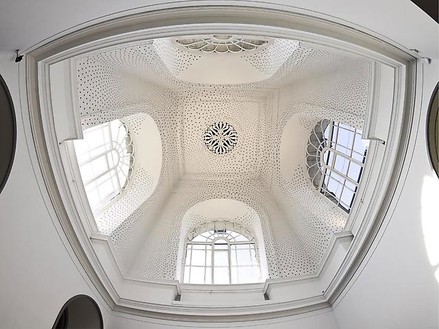 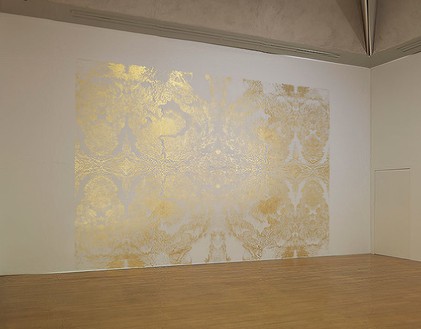 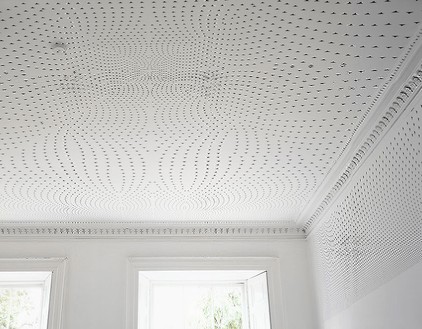 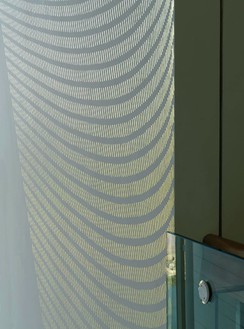 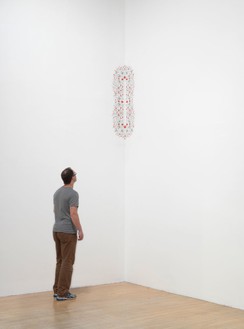 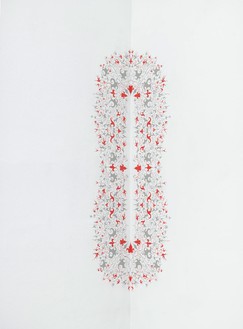 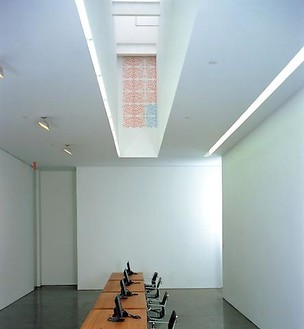 Richard Wright is best known for his site-specific yet transient works that unite painting with graphic and typographic elements, charging architectural spaces with a fourth dimension of subtle yet extreme optical complexity and subverting the traditionally static dynamic between painting and viewer. His paintings and applied metal-leaf schemes connote memory and ephemerality—these works are short-lived, oftentimes lasting only as long as the exhibition. Alongside works on interior surfaces such as walls and ceilings, Wright’s works on paper encompass a range of handmade prints, ink drawings, gilding, and watercolors. More recently, Wright has installed leaded glass into existing window or skylight apertures, allowing the work to meld with the fabric of the building. These interventions, utilizing various mediums, serve to shift the viewer’s perception of the space. As Sofia Karamani commented in her text for the Turner Prize in 2009:

“Wright’s profound understanding of art and its history is reflected in his diverse imagery; minimalist patterns and baroque ornamentations to gothic iconography and typography. His wall paintings can occupy whole rooms, appearing convoluted and extensive, to create a sublime impact. Others, subtle and delicate, are awkwardly placed, claiming a modest existence on a ceiling, a cornice, the edge of a wall. As Wright invents alternative spatial arrangements, solid structures can look broken up, reconfigured, or seem transparent and fluid.”

Wright was awarded the Turner Prize in 2009 and is considered one of the key artists in the generation that emerged out of Glasgow in the 1990s, together with Martin Boyce, Douglas Gordon, and Simon Starling.In 2016 Wright was commissioned to make a vast permanent gold leaf work for the 400th anniversary of the Inigo Jones-designed Queen’s House (now part of the Royal Museums Greenwich), which was the first fully Classically designed building in the UK. Wright’s work cloaks the whole ceiling and upper walls of the Great Hall.

In 2018 he was commissioned by the Crossrail Art Programme to make a vast ceiling work more than eighty feet long at Tottenham Court Road station for London’s new Elizabeth railway line, projected to open in 2022.

Wright lives and works in Norfolk, England, and Glasgow, Scotland. 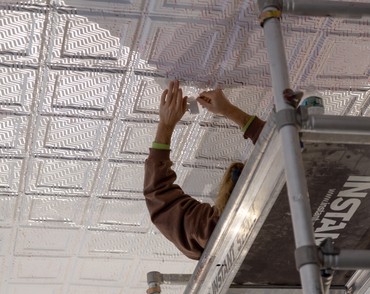 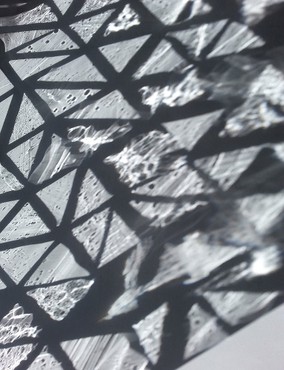 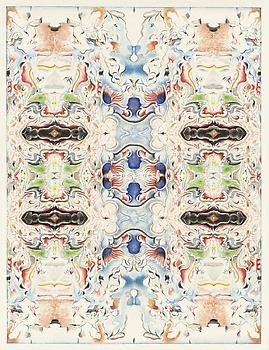 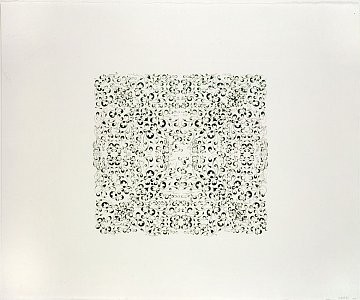 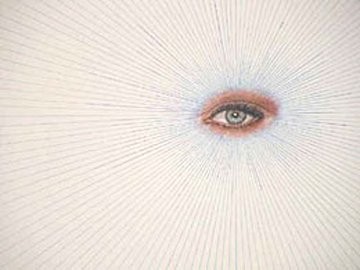 See all Exhibitions for Richard Wright 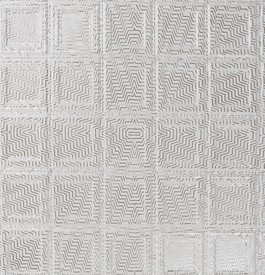 Behind the Art
Richard Wright

In an interview with Kay Pallister, the artist explains his relationship to drawing and the importance of time in his site-specific works. 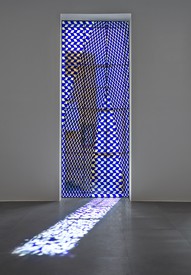 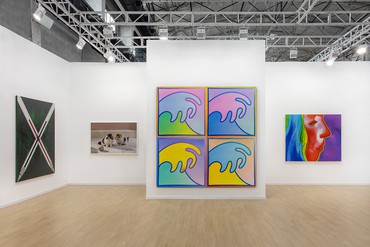 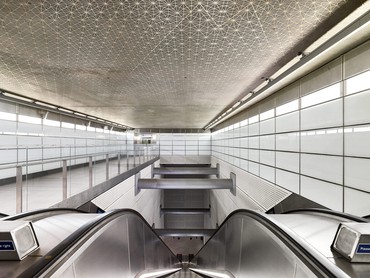 Richard Wright’s no title (2018) has been installed on the ceiling of the Tottenham Court Road station’s eastern ticket hall as part of the Transport for London (TfL) Elizabeth Line, which opened for service on May 25, 2022. To make this work, Wright and his team painstakingly applied gold leaf to the raw concrete ceiling in an intricate geometric pattern whose reflectivity fluctuates depending on the ambient light. At seven stations on the Elizabeth Line, the Crossrail Art Programme commissioned public artworks that have been designed to interact both physically and conceptually with their sites. 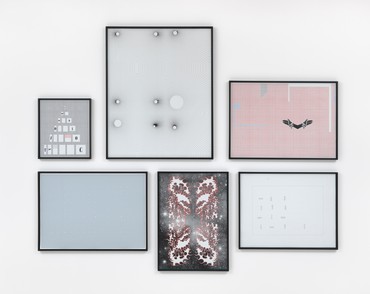 Founded by philanthropist and Make‐A‐Wish UK patron Batia Ofer, the third annual Art of Wishes will feature a benefit auction to raise money for Make-A-Wish UK, a nonprofit organization that grants the wishes of children with critical illnesses. In advance of the charity event, a preview of the artworks will be open to the public from September 19 to 20 at Phillips London in Berkeley Square. More than twenty artworks by leading international artists such as Virgil Abloh, Michael Craig‐Martin, Takashi Murakami, Richard Wright, and others will be included.

See all News for Richard Wright

Art Capital: Art for the Elizabeth Line showcases nine internationally renowned artists and their plans to create major public artworks for London’s newest railway, the Elizabeth line. Each artist has been commissioned to create a work of art sympathetic to the locality, history, or function of one of the stations. The exhibition brings together sketches, maquettes, and prototypes to reveal the artists’ ideas transformed into deliverable public art. Work by Douglas Gordon and Richard Wright is included.