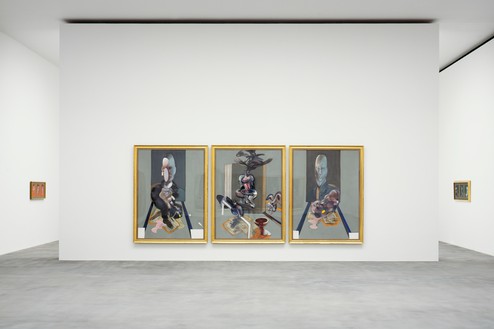 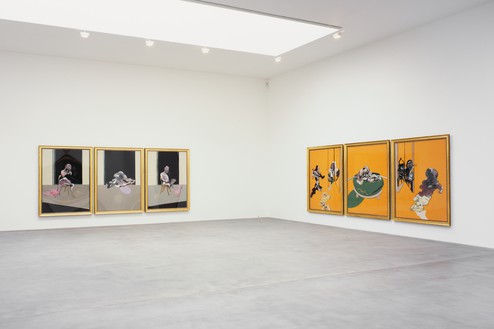 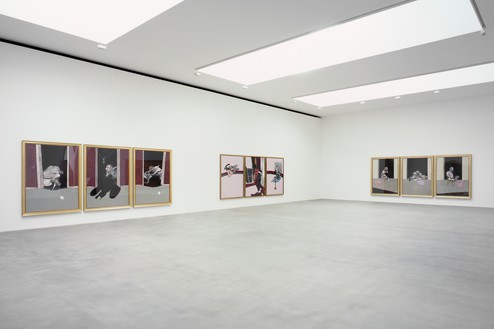 Francis Bacon, Three Studies for a Portrait Including Self-Portrait, 1967

Triptychs are the thing I like doing most, and I think this may be related to the thought I’ve sometimes had of making a film. I like the juxtaposition of the images separated on three different canvases. So far as my work has any quality, I often feel perhaps it is the triptychs that have the most quality.
—Francis Bacon, 1979

Gagosian is pleased to announce an exhibition of triptychs by the late Francis Bacon. This is the first exhibition of the artist’s work in the United Kingdom since the Hayward Gallery retrospective in 1998 and it includes many important loans from public institutions and private collections.

In the famous interviews with David Sylvester, Bacon states, “I see every image all the time in a shifting way and almost in shifting sequences. . . . one picture reflects on the other continuously and sometimes they’re better in series than they are separately because, unfortunately, I’ve never yet been able to make the one image that sums up all the others. So one image against the other seems to be able to say more.” Thus Bacon’s painting, with its visceral, ever-intensifying exploration of the relation between figure and field, proceeds through series: series of crucifixions, series of Popes, series of portraits and self-portraits, series of simultaneity itself, as in the triptychs. And within each work, whether single or triple, each painting, each figure is itself a shifting sequence or series of sensations; each sensation exists at different levels, in different orders, or in different domains, brought together in the artist’s attempt, as he himself describes it, “to capture the appearance together with the cluster of sensations that the appearance arouses in me.”

The triptych format first appeared in Bacon’s pivotal work, Three Studies for Figures at the Base of a Crucifixion (1944). This small triptych contained the seed for the first large triptych Three Studies for a Crucifixion (1962), which in turn set in motion a long process of large triptychs of almost consistent dimension. Although Bacon was clearly aware of the historical antecedents in religious art, he cites the panoramic cinema screen as the main inspiration for his use of the triptych, thus totally recreating it as a topical format. Gilles Deleuze writes in Francis Bacon: The Logic of Sensation (1981), “The triptych has thoroughly separate sections, truly distinct, which in advance negate any narrative that would establish itself among them. Yet Bacon also links these sections with a kind of brutal, unifying distribution that makes them interrelate free of any symbolic undercurrent.”

Over a period of thirty years, Bacon completed thirty-three large triptychs, several of which he subsequently dismantled or destroyed. The large triptychs can be classified into three broad categories, all of which are represented in this exhibition: a sequenced event involving figures that is dramatic or erotic (Studies from the Human Body, 1970); a trio of full-length seated figures (Triptych, 1976); a trio of single nude figures (August, 1972). Attendant panels show a bio morph or a still life; others depict figures in diverse states of action or inertia. Concurrently, Bacon painted small triptych self-portraits and portraits of friends, scaled to evoke the likeness of the subject. In these triptychs, the portraits are arranged like mug shots—left profile, center, and right profile—although all resemblance to photographic verisimilitude stops there in the convulsive, dematerialized planes of Bacon’s painted faces.

In Bacon’s art, modernity and tradition converge. His ectoplasmic figures strain like savage forces of nature against the shallow, large fields of intense color and the cool armatures that bind them to the picture plane. In his gut-wrenching serialization of the human body and its sensations, he shows himself to be the unflinching witness of the hysterical reality of the body and the primal fear of those who inhabit it.

The publication accompanying the exhibition includes previously unpublished correspondence between the artist and philosopher Michel Leiris, dating from 1966 to 1982. 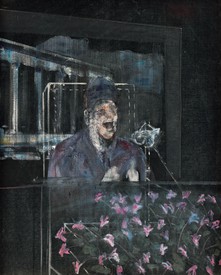 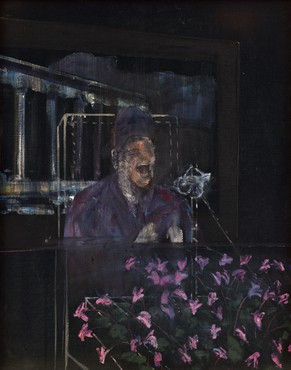 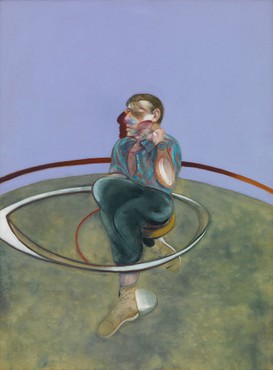