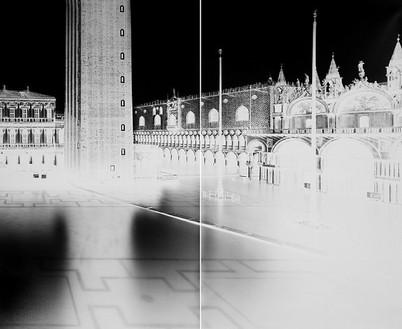 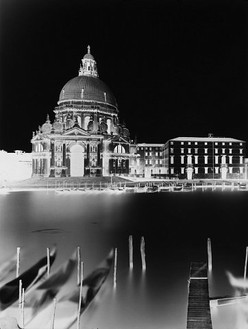 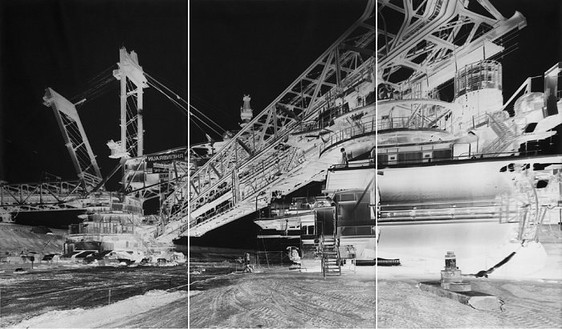 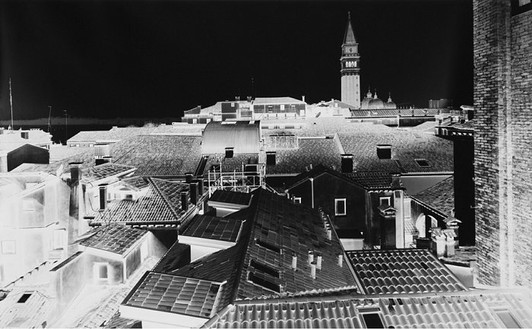 Instability, uncertainty, suspense, and monumentality are entities that I consider and think about; they generate work.
—Vera Lutter

Gagosian Gallery is pleased to announce an exhibition of new large-scale unique photographs by Vera Lutter. In two distinct and opposite series, Venice and RHEINBRAUN, Lutter continues to explore her fascination with the Manichean forces of nature and culture via a dialectics of representation evinced from her innovative use of the camera obscura. In Lutter's conceptual approach to this primitive form of photography, the apparatus records not only what exists in the world outside but also its own condition. By choosing to retain the negative, rather than reprinting to create a positive image, Lutter transforms the visual facts of her chosen environments into uncanny looking-glass scenes that reflect on the two principal realities of time and space.

In the first of two groups of works that take Venice as their subject, Lutter sought to "render a place that exists outside gravity," building on her previous recordings of industrial landscapes and cities surrounded by water, such as Old Slip, New York (1995), and Cleveland (1997). Aided by a serendipitous flood in Venice, she was able to capture mirage-like emanations of San Marco and Piazza Leoni. These spectral landmarks appear to hover above their own image, mirrored in the limpid ground on which they rest. Lutter returned to Venice the following year to record the area where the Grand Canal flows into the Baccino, which then opens up into the lagoon. It is this unstable body of water that gives Venice its special ethereal character but that, paradoxically, threatens the floating city's very existence.

In contrast to the haunting romance of Venice is the RHEINBRAUN series that Lutter executed in Hambach, an industrial region in Germany which, over the last century, has been topographically and culturally defined by the extensive strip-mining of brown coal. Drawn by the same entropic melancholy that has fascinated artists from Robert Smithson to the Bechers, Lutter (who, significantly, also grew up in this region) has produced her own meditations on the transformation and devastation of this landscape. In a dramatic shift of scale and perspective, she captures the world's largest machine cutting huge swathes through the earth's surface to harvest raw fuel for human use.

Vera Lutter was born in Germany and lives and works in New York. Her photographs have been exhibited extensively in the US and abroad, including the Kunsthaus Graz, Austria; the Kunsthalle, Basel; Dia Art Foundation, New York; Museum of Modern Art, New York; and the Whitney Museum of American Art, New York.