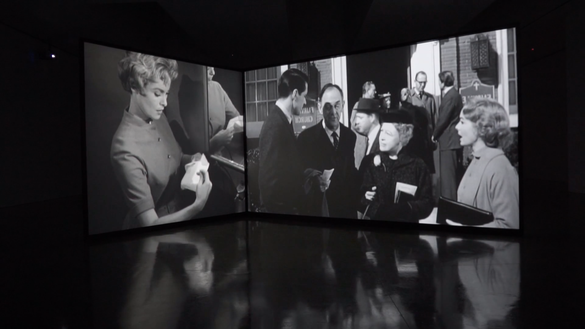 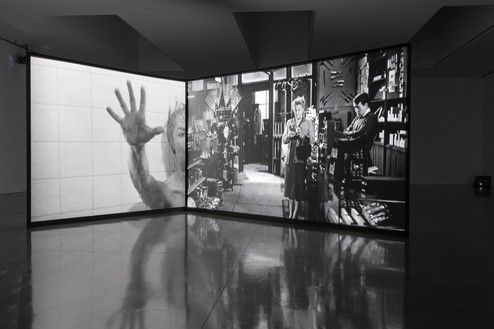 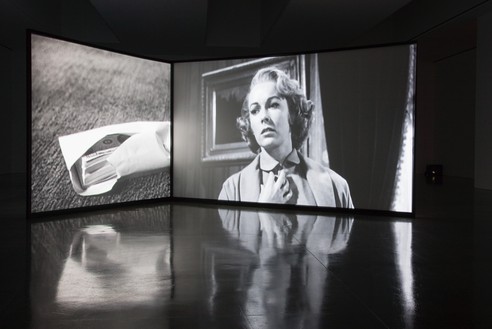 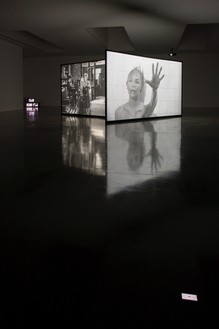 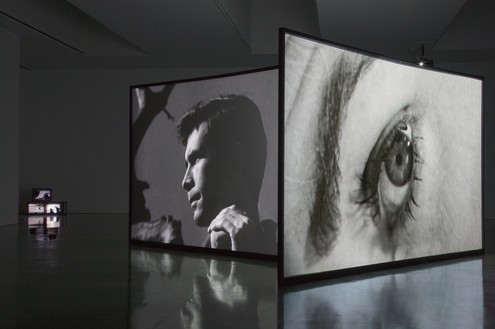 If you want to find the truth in something, take it apart piece by piece, then put it back together with the detail of a forensic scientist. This is a classical way to deconstruct a narrative. However, when you stand in front of 24 Hour Psycho (1993) slowly unfolding piece by piece, after five minutes, you’ve lost track of where the narrative started. I like this idea that you can take almost a scientific method and end up lost in a labyrinth of multiple, conflicting meanings, and that you have to acknowledge your own forgetfulness.
—Douglas Gordon

Gagosian is pleased to present back and forth and forth and back, an exhibition of key films and videos by Douglas Gordon, including 24 Hour Psycho Back and Forth and To and Fro (2008), as well as a selection of video monitor works.

In his projections, installations, photographs, text works, performances, and more, Gordon investigates collective memory and selfhood, whether divided, fragmented, or dissolved altogether. His interest in temporal manipulation is especially evident in his films and videos; using his own work and that of others as raw material, he distorts time in order to disorient and challenge.

For 24 Hour Psycho Back and Forth and To and Fro (2008), Gordon exacerbates the already unsettling plot of Alfred Hitchcock’s iconic thriller Psycho (1960) by allowing time to flow forward and backward at the same time. While Gordon’s earlier 24 Hour Psycho (1993) slowed down Hitchcock’s original to a few frames per second, extending the duration of the film to twenty-four hours, 24 Hour Psycho Back and Forth and To and Fro introduces an additional layer of distortion. The film plays on two adjoining screens: on one, the film starts from the beginning, and on the other it starts from the end, so that for an unbearably brief moment (one twenty-fourth of a second), after waiting for twelve hours, the screens show the same sequence, the mirrored images resembling a giant, slow-moving Rorschach test.

Using edited footage as a malleable resource, Gordon sets up new definitions of suspense and climax. Rather than waiting for Janet Leigh’s killer to appear in silhouette, knife in hand, behind her, viewers of Gordon’s film enter a hypnotic and photographic spectacle with the hope of simply catching the split second when two temporal directions overlap. 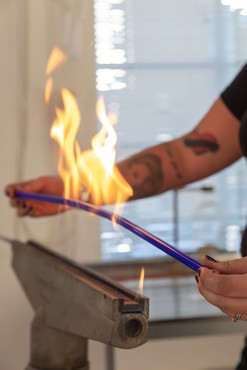