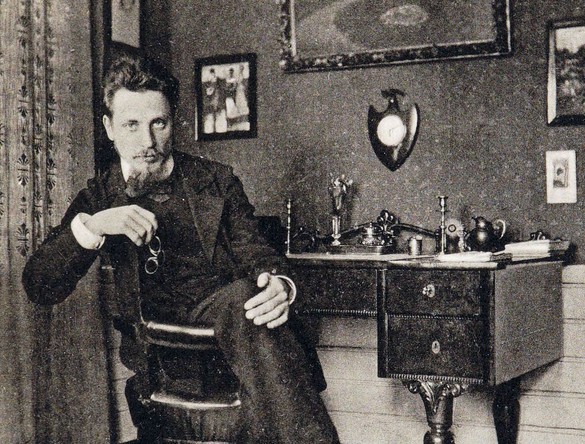 Bobbie Sheng is a press writer for Gagosian. She has held curatorial research positions at the Frick Collection, New York, and the Art Institute of Chicago.

More than ever
the things of experience are falling away, since
what ousts and replaces them is an act with no image.
An act, under a crust that will split, as soon as
the business within outgrows it, and limit itself differently.
Between the hammers, our heart
lives on, as the tongue
between the teeth, that
in spite of them, keeps praising.

In 1912, Rainer Maria Rilke received an invitation from Princess Marie von Thurn und Taxis—his longtime patron and closest friend—to stay at Duino Castle, a picturesque fortress just north of Trieste, Italy. There, while standing atop a cliff overlooking the Adriatic Sea, Rilke claimed to hear the following line: “Who, if I cried out, would hear me among the angelic orders?” That evening, the poet immediately set to work, turning these words into the opening lines of what would eventually become the Duino Elegies.

For the next decade, Rilke would engage in an arduous cycle of labor characterized by violent and sporadic bouts of literary creation. It was not until 1923 that the Duino Elegies emerged in their totality: a collection of ten intensely religious metaphysical poems informed by the anxieties, traumas, and fragmentations brought on by war and modern life. Yet even as they address the interplay between suffering and beauty in human existence, the Elegies nevertheless project a hopeful vision of a more peaceful world. In the century since its creation, Rilke’s seminal work has inspired generations of artists, providing a direct launching point as well as informing broader ruminations on humankind’s fleeting moments of contact with transient, sublime beauty.

Ten years prior to his divine encounter on the Adriatic cliffs, Rilke had moved to Paris to write a monograph on Auguste Rodin, initiating a complex but lasting friendship between the two men. Rilke venerated the sculptor’s ability to translate poetic sentiments into figuration, as exemplified by Rodin’s large bronze cast La muse tragique (1896). Originally conceived as part of the Monument to Victor Hugo (1889)—in which the muse is perched above the French literary giant and whispers inspiration into his ear—this version of La muse tragique takes the form of a single-figure sculpture, thus evoking a heightened pathos befitting its subject’s symbolic identity. The resulting work is perhaps even more haunting than the original monument; the muse’s arm encircles a missing human presence—a negative space that is at once funereal and ethereal. 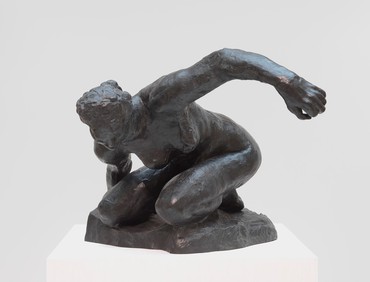 In the 1960s, a young Anselm Kiefer picked up a copy of Rilke’s Rodin monograph, marking his first encounter with the work of sculptor and poet alike. Through Rilke’s evocative prose, Kiefer developed a profound appreciation for Rodin, whose naturalistic touch and tendency toward the monumental would make him one of Kiefer’s most enduring sources of inspiration. But the clearest connection between the two artists emerges through their watercolors and oil paintings: simple yet sensuous nude studies, and fantastical landscapes whose roiling accumulations of pigment and texture delve into the realm of semiabstraction.

Look, trees exist; houses
we live in, still stand. Only we
pass everything by, like an exchange of air.
And all is at one, in keeping us secret, half out of
shame perhaps, half out of inexpressible hope. 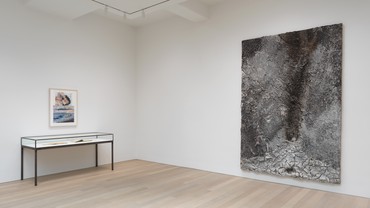 First conceived in 1893, Medardo Rosso’s Bambino ebreo (Jewish Boy) emerged as one of the artist’s most beloved late-career motifs. In a continuing endeavor to represent complex emotion in the young child’s features, Rosso re-created and recast the somber portrait bust several times for numerous exhibitions and personal gifts. In a plaster version of Bambino ebreo of circa 1920–25, Rosso employed wax—normally a preparatory medium—as a finish, harnessing its deathly connotations of impermanence and decay as well as its approximation of the warmth and tenderness of human flesh, his impulse akin to Rilke’s own existential meditations on the temporary nature of life.

For beauty is nothing but
the beginning of terror, that we are still able to bear,
and we revere it so, because it calmly disdains
to destroy us. 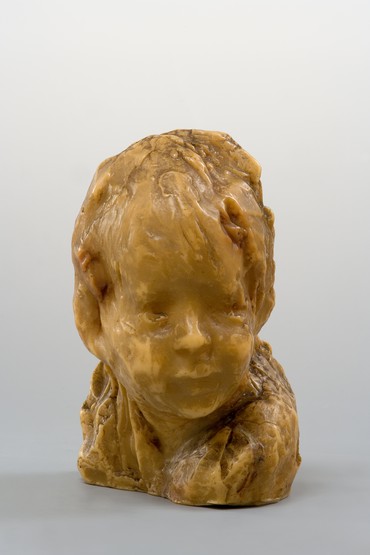 Reminiscing on his formative education, Cy Twombly wrote: “It was impossible to come out of Black Mountain College and not love Rilke.” Forging a direct, powerful connection to the Elegies, Twombly’s painting Duino (1967) marries the artist’s investigations of geometric form with his consistent interest in literature. To create this “blackboard”—one of a group of works named for their evocation of the schoolroom wall—Twombly scrawled, effaced, and reinscribed the name of Rilke’s titular castle in white wax crayon on a dark gray oil ground, positing the act of writing as an artistic gesture in itself. 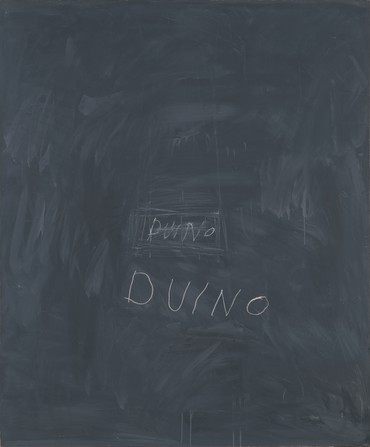 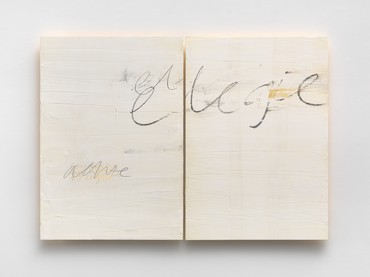 On the occasion of Duino Elegies, presented in March 2020 at Gagosian in New York Edmund de Waal produced elegie (2020), a new work in dialogue with Twombly’s painting for which de Waal used his chosen medium of ceramics to improvise on the earlier artist’s trademark handwritten canvases. The connection to Rilke is a personal one for de Waal: his grandmother Elisabeth de Waal (née Ephrussi) was a writer who struck up an extended correspondence about poetry with Rilke himself. De Waal’s diptych is made from kaolin brushed over a pair of wood panels; on top of these chalky surfaces he scribbles literary snippets in graphite and oil stick, partially smearing and overwriting them to simulate the mutability of observation. With its looping, penciled-in script and pale ground, de Waal’s graphic sculpture comprises an aesthetic inverse and creative tribute to Twombly’s Duino—and to the literary legacy of Rilke before him. 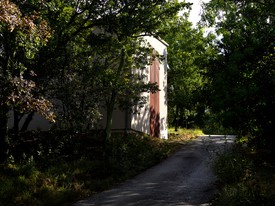 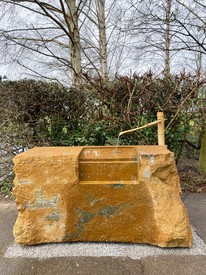