Oscar Claude Monet was born in Paris in 1840. As a teenager, he developed a reputation as a caricaturist, and studied with the landscape artist Eugéne Boudin. Over the course of his prolific career, he produced more than 2,000 paintings. By the end of the 1890s he was well established and hailed as France's leading landscape painter. In the remaining years of his life, he staged only four exhibitions, all in Paris—recent works and views of Le pont japonais in 1900, a selection of London paintings in 1904, the Nymphéas in 1909, and views of Venice in 1912—each to great critical acclaim. On November 12, 1918, the day after the Armistice, Monet offered to donate two paintings to France in honor of the victory. This offer became the basis for his eventual gift of twenty-two decorative panels depicting his water lily garden, which were installed permanently in the Musée de l'Orangerie in Paris in 1927. Recent exhibitions of his work include "Monet in the 20th Century," Museum of Fine Arts, Boston (1998, traveled to the Royal Academy of Arts, London in 1999); "Monet, le cycle des Nymphéas," Musée de l'Orangerie, Paris (1999); "Claude Monet...Up to Digital Impressionism," Fondation Beyeler (2002); "Monet's Garden" and "Monet's Water Lilies," Museum of Modern Art, New York (2010). Oscar Claude Monet died at Giverny in 1926 at the age of 86. 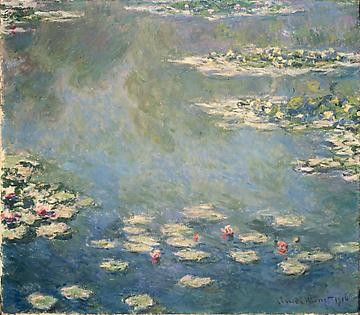 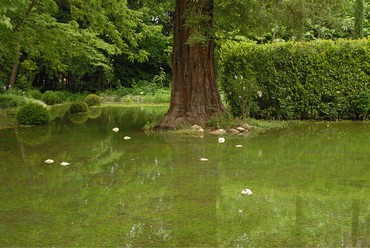 A 2008 video installation by Douglas Gordon, shown on two monitors, is on display in Brazil. The work presents a garden strewn with skulls being gradually flooded. Filmed in the garden of the artist’s residence in Montfavet, the work invokes an immediate parallel with Claude Monet’s infamous Water Lilies. 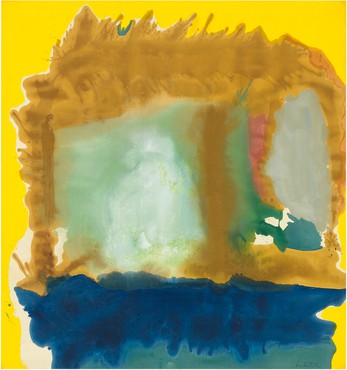 Helen Frankenthaler in
The Water Lilies: American Abstract Art and the Last Monet

In 1955, Alfred H. Barr Jr. brought one of Claude Monet’s large panels of Water Lilies into the collection of the Museum of Modern Art in New York. At that time, Monet’s work was presented as “a bridge between the naturalism of early Impressionism and the highly developed school of abstract art” in New York. This exhibition focuses on the precise moment when these paintings were rediscovered and the New York School was first being recognized. Included are a selection of some of Monet’s later works and some twenty major paintings by American artists. Work by Helen Frankenthaler is included.