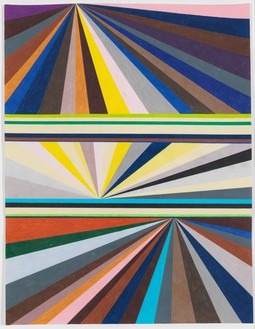 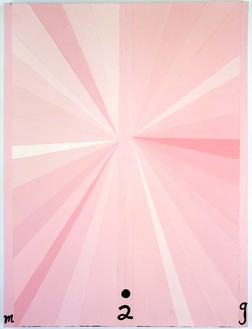 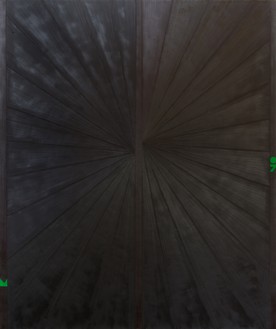 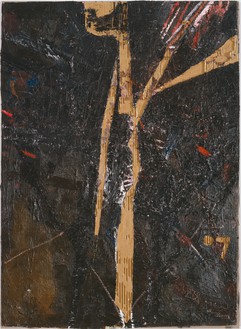 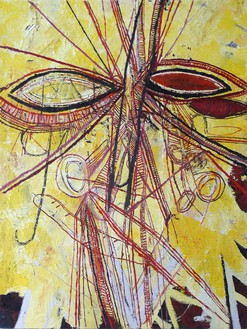 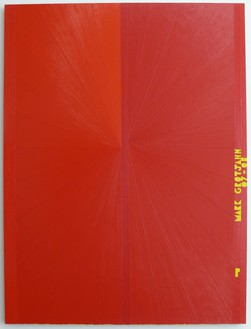 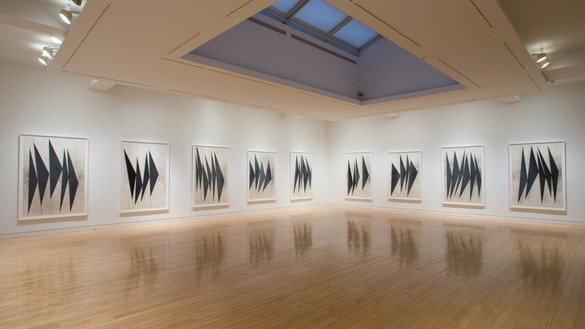 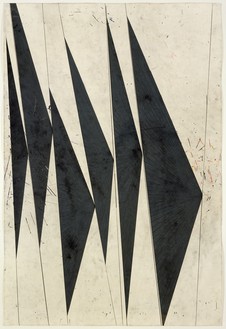 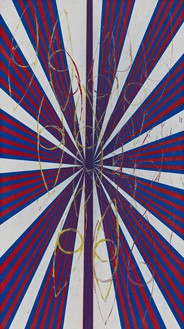 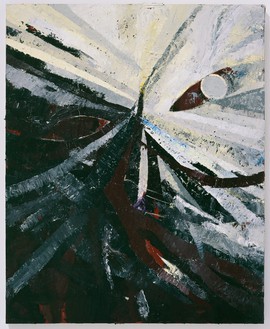 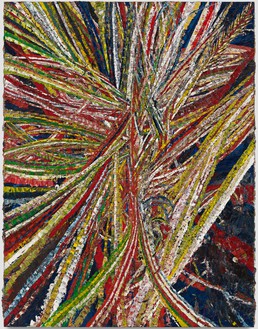 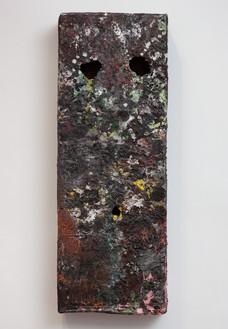 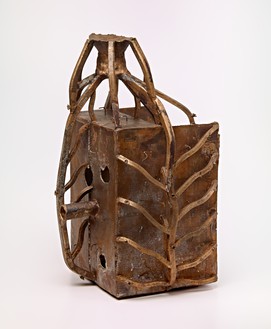 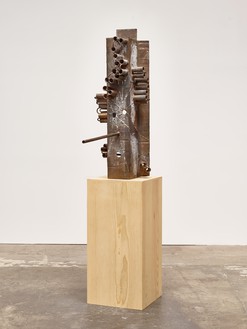 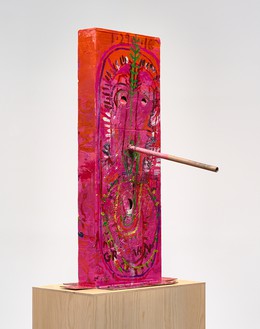 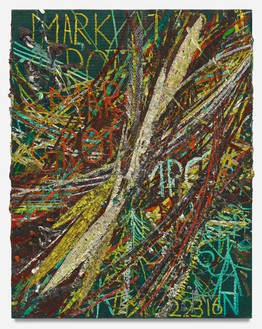 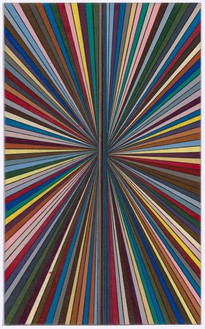 Because I have an active and obsessive eye‚ I’m interested in finding as much contentment as I possibly can. In my work I create problems and then solve them in order to feel peace.
—Mark Grotjahn

Mark Grotjahn combines gesture and geometry with abstraction and figuration in visually dynamic paintings, sculptures, and works on paper. Each of his series reflects a range of art-historical influences and unfolds in almost obsessive permutations.

Grotjahn was born in Pasadena, California. He received a BFA from the University of Colorado at Boulder and an MFA from the University of California at Berkeley. While studying in California, he began his first major project, Sign Exchange (1993–98), in which he painted replicas of signs that he saw in stores around Los Angeles, then had the store owners display his hand-painted versions in place of the originals. In 1995 Grotjahn was an artist-in-residence at the Skowhegan School of Painting and Sculpture in Madison, Maine. He moved to Los Angeles a year later and, with his classmate Brent Petersen, opened the short-lived gallery Room 702.

In 2001 Grotjahn began the Butterfly series. These geometric paintings and drawings explore the constructs of dual and multi-point perspective and take on various forms as Grotjahn alters their composition and color. A selection of multicolored and monochromatic Butterfly works on paper were exhibited in 2005 at the Hammer Museum, Los Angeles. In 2018 the Los Angeles County Museum of Art presented 50 Kitchens (2013–18), from the same series, a work with more than fifty parts that all evolved from a single composition and incorporate residual traces of earlier drawings. Continuing his investigations of symmetry, perspective, and form, Grotjahn began the Face paintings in 2003. These expressive, anthropomorphic works of cardboard on canvas often feature sections cut away to reveal painted canvas beneath. As the series progresses, the faces become less apparent and more abstract, their curved lines creating void-like apertures.

Alongside his painting practice, Grotjahn has been making masks since 2000, painting cardboard boxes lying around his studio and affixing paper tubes between cut-out “eyes.” The Masks (2000–), although originally approached as a less formal project, came to assert themselves as a new armature for his painting. In 2010 Grotjahn started casting the Masks in bronze. In many of the sculptures, he incorporated and retained remnants of the bronze casting process, such as the sprues and runners, into his final work. As he does with his paintings, Grotjahn often boldly signs the Masks, allowing his signature to come forward as a compositional element. In 2014 the Nasher Sculpture Center in Dallas presented the first museum exhibition of Grotjahn’s sculpture, including small-scale and larger freestanding works.

In 2016 Grotjahn began the Capri works (2016–), seeking to break away from the Face paintings in favor of a more experimental, spontaneous working process. The first Capri works, New Capri, were modestly scaled paintings created for a private presentation at Casa Malaparte in Capri, Italy. Following this exhibition, Grotjahn created the Capri paintings (2016–), followed by the Free Capri series (2018–), in which he introduced the technique of scraping out areas of thick paint, then placing the resulting “slugs” in rows and grids elsewhere on the canvas.

As the Butterflies, Faces, Masks, and Capri series continue to expand, Grotjahn uses Instagram to further experiment with repetition and juxtaposition, employing the grid format to freely arrange images in different combinations, in a form of visual tic-tac-toe. Throughout his work, by finding variations within his immediately identifiable style, Grotjahn reveals the complexities of authorial gesture. 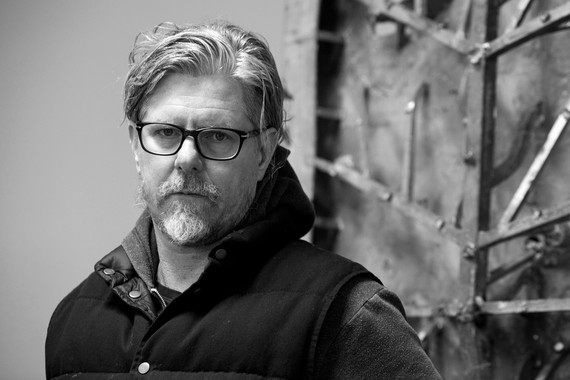 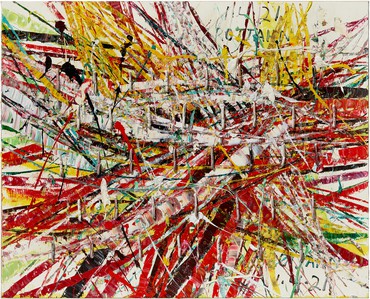 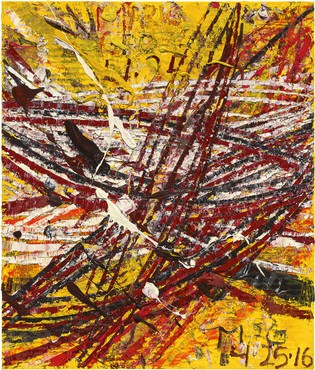 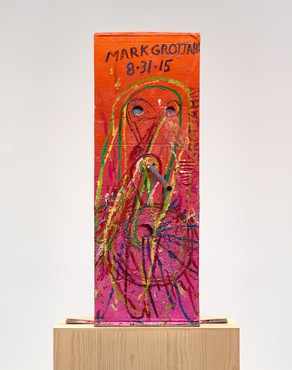 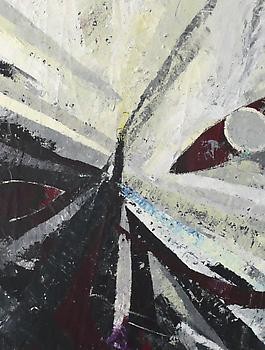 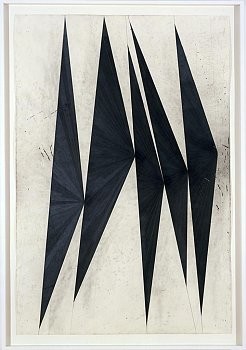 See all Exhibitions for Mark Grotjahn 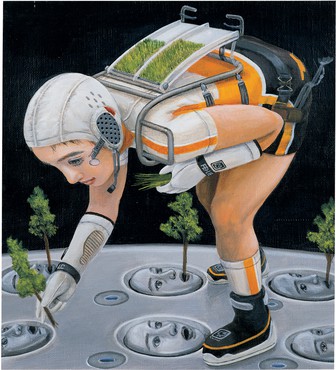 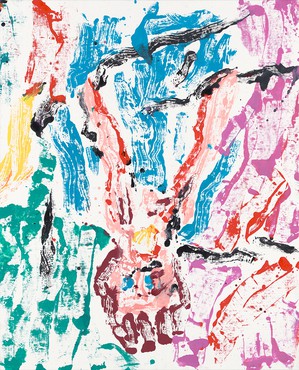 Gagosian is pleased to participate in Art Basel Hong Kong with a presentation of modern and contemporary painting and sculpture by gallery artists. New paintings by Georg Baselitz, Alex Israel, Ed Ruscha, and Sarah Sze are featured alongside exceptional works in a range of mediums by Louise Bonnet, Theaster Gates, Henry Moore, Nam June Paik, and others, uncovering formal and conceptual innovations and associations that span genres and aesthetic approaches.

See all News for Mark Grotjahn 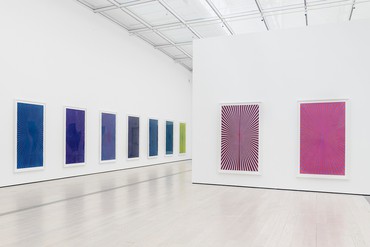 Conceived as one work, Mark Grotjahn’s 50 Kitchens (2013–18) takes its inspiration from a single Butterfly composition that Grotjahn made to meet the dimensional specifications of a wall in his kitchen. The more than fifty subsequent chromatic drawings explore pairs of radiating colors and together create a prismatic display. Grotjahn began making his Butterfly compositions in 2001. This exhibition was the first presentation of 50 Kitchens at LACMA. 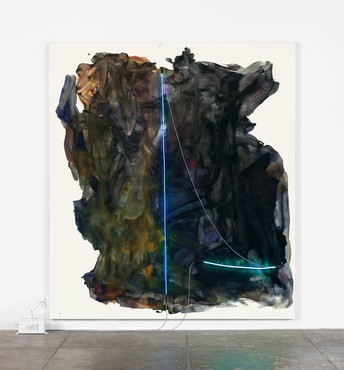 The Forever Now
Contemporary Painting in an Atemporal World

Forever Now presents the work of seventeen artists whose paintings reflect a singular approach that characterizes our cultural moment at the beginning of the new millennium: they refuse to allow us to define or even meter our time by them. They represent a wide variety of styles and impulses, but all use the painted surface as a platform, map, or metaphoric screen on which genres intermingle, morph, and collide. Work by Joe Bradley, Mark Grotjahn, and Mary Weatherford is included. 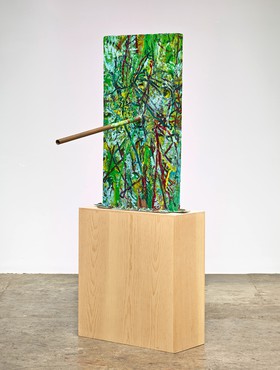 This exhibition was the first dedicated museum presentation of Mark Grotjahn’s sculpture, which the artist began producing privately in 2000, alongside his painting practice. It showcased many never-before-seen, three-dimensional works, ranging in size from small, intimate compositions to larger-scale freestanding works. Combining common cardboard boxes and tubes and cutting them to roughly resemble masks or faces, Grotjahn then scraped these assemblages and cast them in bronze, which he either left raw or elaborately painted.

Circus Circus was Mark Grotjahn’s first solo exhibition in Germany. Both adopting and commenting on a range of art historical influences, from Renaissance-era drawing technique to Abstract Expressionism and Op art, the works on view demonstrated the artist’s ability to combine the opposing modes of abstraction and figuration. The presentation included a new series of large-scale paintings.