Morgan Falconer visits the artist’s studio outside Munich to learn more about his newest paintings, a series entitled Devotion. 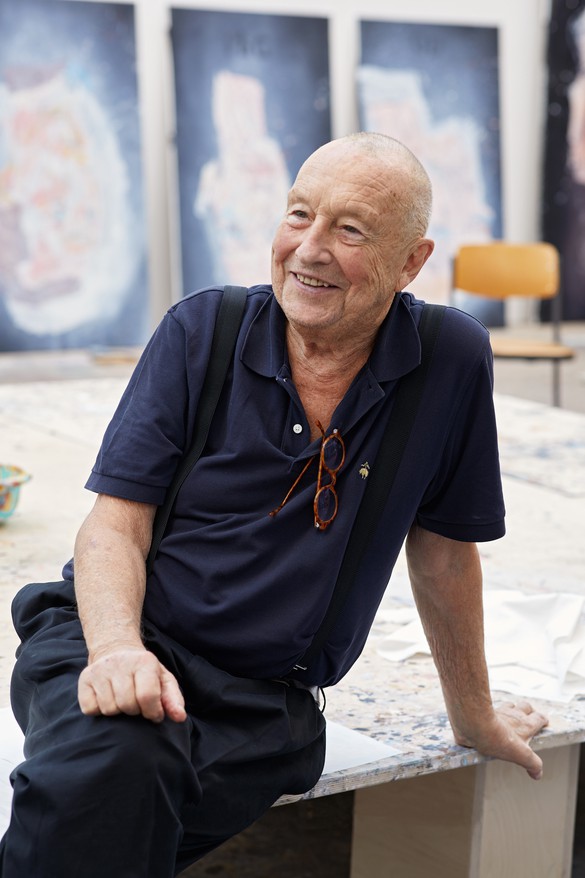 Morgan Falconer is Acting Director of the MA in Contemporary Art program at Sotheby’s Institute of Art, New York. Previously a journalist and critic, he has written for The Times (London), Frieze, The Economist, Burlington Magazine, and many other publications. His most recent book is Painting beyond Pollock (Phaidon).

A piping hot Weisswurst was ladled onto my plate when I sat down to lunch recently at Georg Baselitz’s home and studio outside Munich. I’d joined a small party of the artist’s friends and colleagues to view his latest work, but talk of art was put aside for an hour while we chatted about Bavaria’s lively politics, the backroom dramas in Munich’s museums, and whether it’s ever too late to eat a Weisswurst. (Custom dictates that it’s a morning food, but they’re just too great to be confined to one part of the day.) When we stepped away from the table, I remarked on how good the meal was and another guest laughed. “You know what Otto von Bismarck said about sausages, don’t you? They’re like laws. It’s best not to see them being made.”

It was all a very German scene, local and traditional, as one might expect with Baselitz, an artist whose work has been central to discussions about art and the nation’s identity since the 1960s. His style was forged by a return to the legacy of German Expressionism, a style that had been suppressed and lampooned by the Nazis, and the lumbering figures in his early paintings often spoke directly and controversially to the state of the nation. Among the pictures in his first solo show, staged in West Berlin in 1963, was Die Grosse Nacht im Eimer (The Big Night Down the Drain, 1962–63), a portrait of a squashed, brutalized, boyish figure holding his disproportionately large phallus; the authorities were unamused and confiscated it. When he represented Germany at the Venice Biennale in 1980, he exhibited a single piece, Modell für eine Skulptur (Model for a Sculpture, 1979–80), a monumental limewood figure daubed in black and red paint and hoisting an upraised arm. Many interpreted the gesture as a Nazi salute, and another controversy ensued that brought Baselitz to wide public attention. But controversies notwithstanding, appreciative audiences have only grown for his work. A major survey of his career was recently staged at the Fondation Beyeler in Basel and at the Hirshhorn Museum and Sculpture Garden in Washington, DC, and another survey will open in Venice in May, where Baselitz will be the first living artist ever to exhibit at the Gallerie dell’Accademia. Some may find it jarring to find him in the home of the Venetians—Giorgione, Bellini, Titian, Tintoretto—but the show will highlight his historical imagination and his fascination with the drama of human existence. 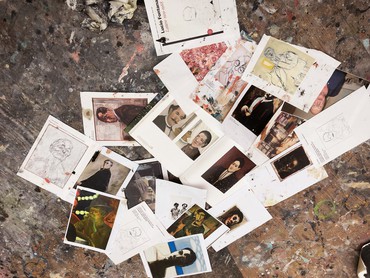 When I arrived at Baselitz’s studio I found him perched on the edge of a large, low table that he uses to work. He was dressed gravely in black, but he would break into a broad laugh when amused; at times he seemed to retreat into his own thoughts, at other times he held forth enthusiastically. His latest body of work is Devotion, a series of portraits inspired, borrowed, lifted, quoted—depending on your point of view—from the self-portraits of other artists he has admired over the years. The artists’ features are broadly described in energetic swaths of paint, their details filled out with delicate, angular lines—and all are inverted, upside down, as almost all of Baselitz’s figures have been since 1969, when, as he puts it, he “made a separation between art and life.” As one would expect, many of the portraits nod to historical expressionists, figures such as Joan Mitchell, Edvard Munch, and Paula Modersohn-Becker, but others hint at dimensions of his mind and practice that reach far beyond the concerns of Germany and German Expressionism. There are portraits of the composer Arnold Schoenberg, the artists Piet Mondrian and Alexander Calder, and tributes to younger international peers working in similar styles, including Cecily Brown, Nicole Eisenman, and Tracey Emin. They add up to a kind of country-house gallery of ancestors, figures in a living tradition that emerge from smoky clouds of darkness to remind the artist of responsibility and destiny. “I’m not in a position to paint a portrait of someone I don’t like,” he says, “not even as a caricature.”

The project feels both old and new for Baselitz, who says, “I have a whole group of artists that I work with in my mind.” The first was perhaps Ferdinand von Rayski, a little-known nineteenth-century German painter whose pictures Baselitz kept encountering in his youth. “When I came away from tachism and CoBrA during my studies, I painted a Rayski self-portrait, and in the end I did five, six, or ten, I don’t know, portraits of Rayski painted in my manner. So it’s a personal tradition I have. I’ve painted portraits of [Ernst Ludwig] Kirchner, [Karl] Schmidt-Rottluff, and [Erich] Heckel many times—working not from self-portraits but from real portraits of them. This time I wanted to use their own self-portraits in their own style, their manner.”

The idea was inspired in part by a self-portrait of Henri Rousseau, the naïve painter celebrated by the Paris avant-garde at the turn of the twentieth century. His portrait was once exhibited by the Blaue Reiter Expressionist group in Munich, and for many years it and its pendant, a portrait of Rousseau’s wife (also interpreted in Baselitz’s new series), were cherished parts of the collection of Pablo Picasso. The Blaue Reiter viewed Rousseau as a touchstone, and by including him here, Baselitz is constructing his own intellectual biography, citing his own origins.

That he should feel the urge to do this in his early eighties says something about his peculiarly fractured and dislocating experience as a young artist. Born near Dresden under the Nazis, on the eve of World War II, he spent his teens in Communist East Germany. He trained as an artist in Berlin, on both sides of the then divided city. At one art school in the city’s east, he learned the rudiments of Socialist Realism, the official style of the Eastern Bloc, but he was quickly expelled for the wonderfully euphemistic sin of “sociopolitical immaturity.” And so he went to the West, where he was inspired by Jackson Pollock and Willem de Kooning but skeptical of the West German taste for abstract art. It was a maturing that brought rapid bursts of exposure to art of different styles and periods, and Baselitz found it engagingly disorienting. 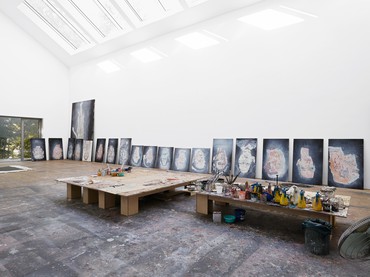 Herein lies one rationale for the famous inversion in his paintings: he scorned the politicization and didacticism of the East’s figurative style, but he was also doubtful about the freedom touted by those in the West who argued that abstract art was the only style for the postwar moment. How better to reject both paths than to turn the figurative pictures upside down, making them abstract? Figuration was dissolved into abstraction, but never so much that it disappeared entirely. Turning the world upside down also seemed an appropriate response to the slaughter and insanity of World War II. As he says, “Just like the philosophers said, there is this spiritual, ethical, aesthetic center that doesn’t exist anymore. There is no God.”

Baselitz locates himself as a German and a European, a creature of the postwar age with an existentialist mindset. If some contemporary artists have slumped into a posture of narrow satire and irony, he reminds you of a time when artists felt it was their responsibility to be big thinkers. But his range of sympathies can be surprising. While he was talking about his outlook as a European, he related an amusing story about his attempts to understand the work of Paul McCarthy, the scabrous and Pop-satirical American West Coast artist whom Baselitz likes a great deal yet who would seem to be his opposite. In 2015, the two had an exhibition together in Athens, and Baselitz asked McCarthy, “What are these ugly things you’re doing? Are you dealing with history, tradition?” No, said McCarthy, America has Hollywood to deal with history. “He was more concerned with being raised a Mormon!”

The more you delve into Baselitz, the more you find someone with eclectic tastes—ancient and modern, somber and comic. He is a serious collector of both African tribal art and sixteenth-century Mannerist prints. And he commissioned Herzog & De Meuron, architects of Tate Modern and much else, to build his home, a sleek rectangle of glass that is curtained, on its upper story, by rough wooden shutters that can be opened and closed according to the seasons. Outside, greeting visitors, is a dark but jaunty metal sculpture by Baselitz depicting himself and his wife, Elke; nearby is one of Barry Flanagan’s light-hearted sculptures of leaping hares.

In his own art, these mixed moods are best encapsulated in the fact that his painted world is turned upside down. It’s a device that recognizes a dark reality—the vanished center he talks about—but it’s also wonderfully absurd and, still, disconcerting. He says it gives him distance from the past, but it puts the viewer at a distance, too. After I’d looked at the new paintings, I walked to a table to see some new drawings that emerged from the series, and I found myself instinctively approaching them with the “right” side up. I felt comfortable that way for a moment, quickly able to discern the faces and their expressions and to let the motifs resolve into recognizable personalities. And then I realized that that was the “wrong” side up. I walked around to the other side of the table and felt properly uncomfortable again. 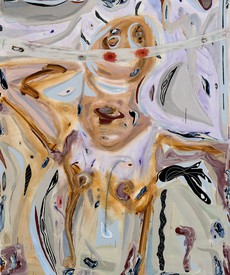