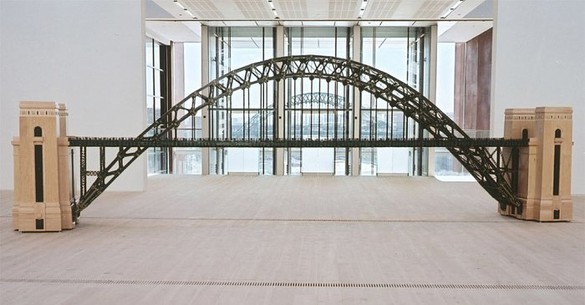 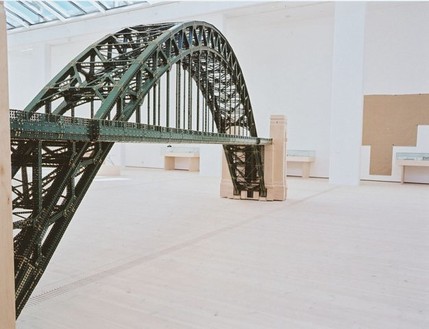 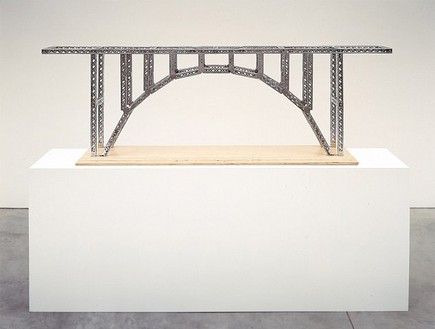 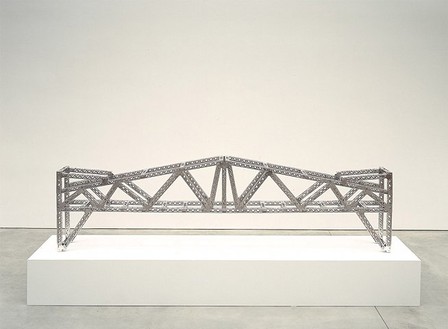 Gagosian is pleased to present its upcoming exhibition of Chris Burden’s recent works. On view will be the Tyne Bridge (2002), a thirty-one-foot-long scale replica of the single-span bridge erected in 1928 across the Tyne River in northern England, as well as two Tyne Bridge Kits (2003), each of which includes the 151,000 parts necessary to potentially construct Burden’s bridge. The monumental Curved Bridge (2003) will also be exhibited, along with several smaller-scale bridges.

Tyne Bridge comprises 200,000 steel parts that have been cast from Meccano model toy pieces and coated with green paint to match the patina of the original bridge. Since 1997, Burden has built a series of scaled reproductions of bridges using parts from Meccano and Erector engineering sets, popular children’s toys during the last century. Tyne Bridge is the sixth of this series and was commissioned for the opening of the Baltic Centre for Contemporary Art in Gateshead, England, the home of the original Tyne Bridge. Curved Bridge, which does not reference an actual bridge, is an equally dramatic form that similarly tests the aesthetic and mechanical boundaries of its model parts.

Born in Boston in 1946, Burden studied architecture, physics, and visual art at the University of California. He completed a series of performance pieces in the 1970s that engaged his own body, often in a violent manner, as part of his conceptual art practice. In recent years, Burden has noted that “my work has gone from dealing with personal issues of power to external issues of power.” His appreciation of well-engineered structures, coupled with a fascination with technology, has led to Burden’s rendering of several fantasy societies in a reduced scale, including Medusa’s Head (1990) and Pizza City (1996). Uniting his performances and sculptures in a body of work that invites human interaction, Burden’s bridges function as inquiries into the nature of architecture and technology, while instigating a dialogue between human beings and scientific progress.