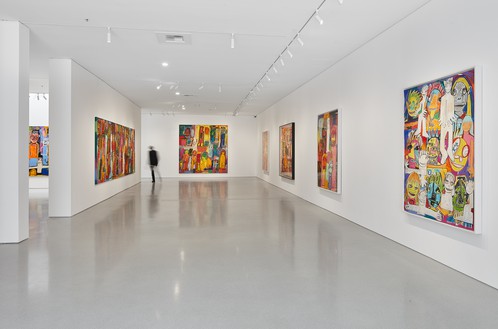 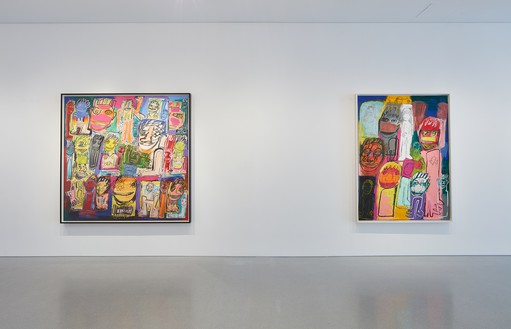 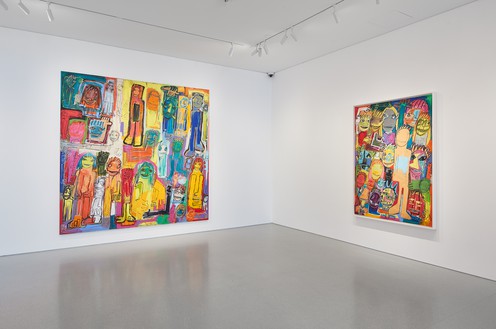 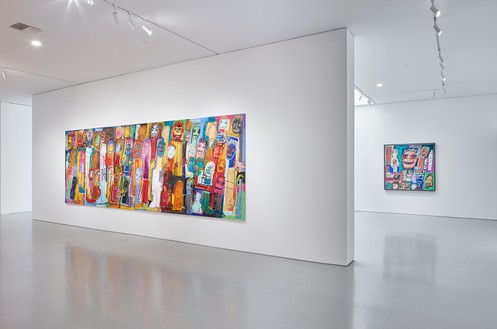 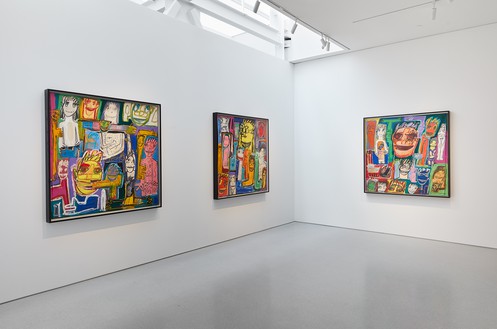 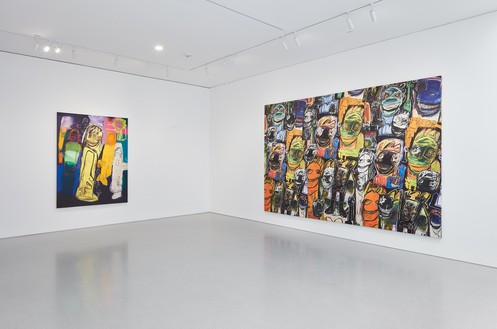 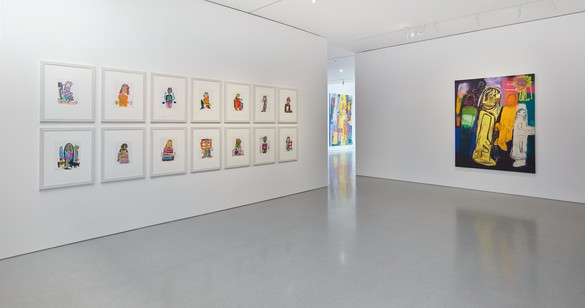 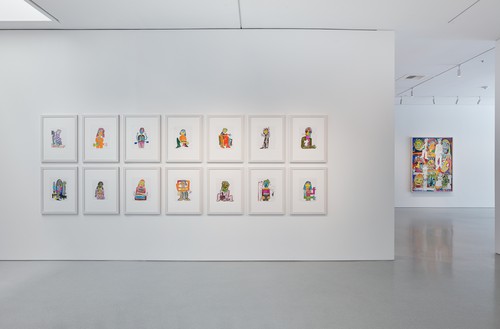 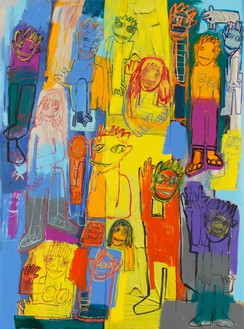 First there were the “dead” heads. (Nothing to do with the Grateful Dead.) Drawn with a Bic pen back in 1972 and ’73. Richard brought these heads with him to NYC when he moved there in 1974. There were about twenty of them. They were drawn from the heart. “They were probably the first things I did that ever had any soul.” But when Richard reached NYC he wasn’t interested in anything to do with feelings, especially his own. He wanted nothing to do with himself. He wanted to change places with someone else, even just for a day. Just to see what it would be like to be someone else.

He knew the heads were the real thing, but he didn’t want the real thing. He wanted something realer. Realer than real. A very real real that was a kind of “virtuoso real.” He put the heads away and started living inside other people’s shoes. For twenty years he lived in a lot of shoes.

Next came the Hippie Drawings.

He had moved out of NYC by then and had kids, and the honesty that he saw in the drawings that they were making reminded him of his own heads from back in ’72 and ’73. But he wasn’t ready to make something with his own blood. That’s how he explained it: “with my own blood.”

So after digging his kids’ drawings, he got to thinking of making drawings based on what he thought a hippie would draw. The “basing” (the direction, deflection, substitution . . . whatever you want to call it) was a way he thought he could “get away with” . . . and, at the same time, “get out of the way.”

The Hippie Drawings that he started making in 1998 and continued to draw for the next couple of years were supposed to be shown in London in early 2000. But, for reasons he can’t explain, he canceled the show and instead just published the catalogue. “At least you had reproductions of the drawings. I was always thinking about the idea of ‘at least’ and ‘almost’ all the time.”

So that’s what he did. Almost. And at least.

He put a self-portrait of himself on the cover, from 1968, when he had long hair and a beard. “Yeah, I kind of looked like a hippie, but I wasn’t a hippie. The portrait was about looking, not being.”

Next up, de Kooning.

In 2004 Richard received a de Kooning catalogue from LA MOCA that Paul Schimmel put together. Richard was spending the summer out east, close to de Kooning’s studio in the Springs. Richard didn’t have a studio. So he took the catalogue and sat in a chair and ripped into it. He “hippified” it.

Some of the de Kooning drawings in the catalogue reminded him of his own Hippie Drawings. De Kooning had style. Richard didn’t. So he used his hippie “pose” and de Kooning’s style, mashed the two together, and started drawing directly in the de Kooning catalogue.

He says he can’t remember the circumstance or why, but he sent the hippie de Kooning book back to MOCA. There was talk about buying it. But they didn’t. They passed. “Hippie de Kooning” was returned and Richard put it away.

A bunch of years went by, and as years go by, books have a way of hanging around.

“This is High Times magazine.”

High Times magazine called to ask if Richard wanted to do a cover. Something about an anniversary cover. Twenty-fifth anniversary? He doesn’t remember the exact number. But they wanted to know if he could give them some Hippie Drawings for a July cover. Richard was surprised. How did High Times know about the Hippie Drawings? The hanging-around book.

The only thing Richard knew about High Times was that his friend Glenn O’Brien used to be the editor. “Editor at large.” Glenn coined the term. Richard had never looked at or paged through a copy of the magazine. He wasn’t even aware that it was still being published. “Yeah,” they said. “Bigger than ever. Pot is everywhere. And if it isn’t, it will be.” They wanted to use five different Hippie Drawings and put out five different covers. Richard went with it.

Q-Tip asks Richard if he wants to illustrate the Tribe’s new album cover. The Tribe hadn’t put out an album in eighteen years. And Q-Tip wanted a Hippie Drawing for the cover. The bell rings again. How did Q-Tip know about the Hippie Drawings?

Got to be the book. The hanging-around book. If there’s some other explanation, all Richard will say is “beat hippie punk.” Yeah, I know—it’s not even an explanation.

A year to a year and a half later, A Tribe Called Quest’s We Got it from Here . . . Thank You 4 Your Service comes out.

In the middle of High Times and the Tribe, Richard was working on a body of work he called Super Group.

Super Group started off simple. One day Richard removed a 33 1/3 rpm record from its sleeve. He held the sleeve in his hand and stared at it. It was paper. It was square. It was foxed. It was yellowed at the edges, and had a hole in it. Even on its own it had inherent meaning. Without thinking Richard took a pencil and signed the sleeve: “To Richard Hell from another Richard Hell.” It was quick. No thought. No intent. Not much of anything. Just reaction. Instant memorabilia. Richard signed the sleeve, framed it, and hung it in his studio. It hung there for a year. After a year of walking back and forth in front of it, Richard went through his record collection and found nine Sonic Youth albums. He removed all the records from their sleeves and gridded and pasted the sleeves with white acrylic paint onto a canvas. He called the painting Nine Sonic Youths. This is a correct title. It’s an accurate title. An accurate description. More of that realer-than-real.

The different “aging” of the nine sleeves reminded him of Agnes Martin. Not exactly the same, but the look of the painting had that soft minimal off-white tone of Martin’s paintings.

The next one was the Kinks.

Richard started referring to this body of work as the Sleeve Paintings. It was an okay title, but not a really good one.

Six months after discovering he could buy all kinds of record sleeves on the Internet (as the Sleeve Paintings start to get bigger, this made using sleeves as a background a lot easier than going to a used record store and carting home a shopping bag full of records), Richard came up with the name Super Group.

He had started writing the names of bands directly onto the sleeves. Writing out the names of groups like Cream and Blind Faith, groups that he grew up with, reminded him of the term used to describe what these two groups were supposed to be:

This was better than Sleeve Paintings.

In the summer of 2016 Richard made a painting of four figures that he called his own Super Group. The painting was based on his early Hippie Drawings. The four figures were a made-up band, but “making up” was something Richard was still having trouble with. “Making up is always trouble.”

By the next summer he was still writing the names of bands on sleeves but he also started adding small hippie-like drawings to the sleeves. The combination of sleeves, names, and drawing made it to Berlin in September 2017, where he had a show called Super Group.

After returning from Berlin he stopped writing the names of bands on sleeves and then stopped using sleeves, but he kept on drawing and painting the hippie figures.

Back in 1998 you couldn’t own your own inkjet machine.

And every artist he knew had their own machine, and so did Richard.

Richard started to make inkjet reproductions of his 1998–99 Hippie Drawings.

It’s got to start somewhere. And that’s where it started. He was appropriating himself. He didn’t put it that way. But that’s the way I can put it.

You can inkjet on almost any surface . . . paper, canvas, linen, cloth. You can scale what you feed into the jet, big or small. It gives you a head start. The printed image can be redrawn, drawn over, added onto, or collaged with other drawings. A new painting can be rephotographed and that new painting can be fed back into the inkjet and you can print it out and start over. Change it. That’s what jetting is good for. Change. And you can do it quickly. The jet spits out the image on canvas in the morning and by the afternoon with nothing but an oil stick you can mark a new eye, nose, and mouth, and have a whole new painting.

Calling these new paintings High Times made sense. It was an open title. “Open-ended.” The title was a lifetime of experiences. And besides, someone had already put that title on five of his Hippie Drawings. It wasn’t like Richard thought it up.

It was fun making these paintings. “Or at least I thought it was fun.”

That’s what Richard finally told me. And he told me wasn’t sure if he’d ever had fun making art.

He couldn’t recall if the emotion or the point of view of “having fun” had ever entered into his past experience of making art.

And if it wasn’t fun, so what?

It was true. And if it wasn’t true, the feelings were true.

Feels good. Something was good again.

“And I’m not sure I’m even pretending.”

And not pretending he was cool with.

“Yeah, I was cool with that. It was time. It was time to go back, remind . . . circle back to the ‘dead’ heads and do something that I was born to do.”

The High Times are him.

Joan Katz is a writer and has known Richard Prince since 1990 when they were in a band together called Black Bra. She lives and works in Prague. 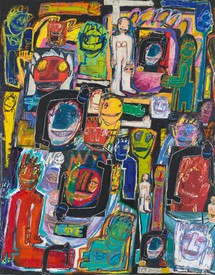 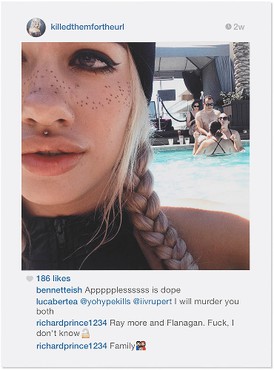 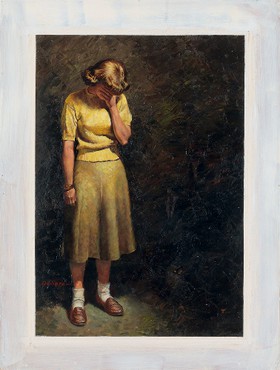