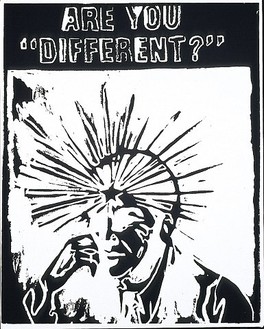 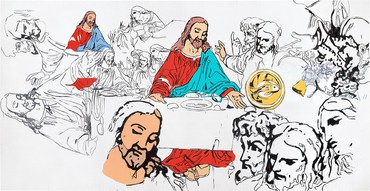 Besides celebrating Andy Warhol as the quintessential artist of his time and place . . . I’d like to recall a side of his character that he hid from all but his closest friends: his spiritual side. Those who knew him in circumstances that were the antithesis of spiritual may be surprised that such a side existed. But exist it did, and it’s the key to the artist’s psyche.
—John Richardson, “Eulogy for Andy Warhol,” 1987

Among the few entirely hand-painted works in his oeuvre, the present example from Andy Warhol’s Last Supper series (1984–86) envelops the viewer in overlapping depictions of Jesus Christ and his disciples, based on Leonardo da Vinci’s Renaissance masterpiece.

Warhol used two reproductions of The Last Supper to create this series, which encompasses paintings, prints, works on paper, and sculpture: a cheap black-and-white photograph of a widely circulated early nineteenth-century engraving of the fresco, and a schematic line drawing reproduced in the Cyclopedia of Painters and Paintings, an art reference book first published in 1885. Consequently, within Warhol’s series, two distinct styles exist: the photograph was used to produce the silkscreened paintings, both in color and in black and white, while the line drawing served as a template for larger, hand-painted compositions, made by tracing the contours of the projected image onto canvas.