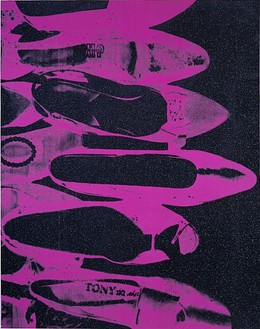 Gagosian Gallery is pleased to announce the most complete presentation yet of Andy Warhol's Diamond Dust Shoe paintings, the spectacular series of works created in 1980.

The image of women's shoes is one of Warhol's primary motifs, as one can see from its prominence in his work from 1955 until his foray into Pop images around 1960. Already a stylish and successful commercial artist in 1955, Warhol was offered the I. Miller account by Geraldine Stutz. Immediately, his whimsical and inventive shoe drawings became the talk of the town, as well as his personal calling card. He created shoe drawings as gifts to friends and influential contacts, mounted an exhibition of gold shoe drawings at the Bodley Gallery in 1957, and even created an illustrated book, Ã la Recherche du Shoe Perdu, which he passed around in New York to publicize himself and his work. Because the magazines paid him a fixed fee for each drawing of a shoe, he loved counting every new batch to see exactly how much money he would be getting. Shoes equaled cash.

Not only did Warhol associate shoes with his heightened success, but he also published and exhibited an acclaimed series of drawings wherein each shoe was dubbed with the name of a celebrity – Mae West, Zsa Zsa Gabor, Truman Capote, and James Dean. By the end of the 1950s, the shoe was Warhol's most prominent personal claim to fame as well as his symbol for the sexiness, glamour and magic of the stardom that he adored.

It was not until 1980 that Warhol returned with force to the motif, setting multi-colored combinations of women's shoes against black backgrounds and covering the surface with sparkling "diamond dust." Most important, Warhol had recently embarked on his magnificent Retrospective Paintings that combined major motifs from his Pop career – a Campbell's Soup Can silk-screened along with Marilyn, Mao, Corn Flakes boxes, and the like. In this retrospective frame of mind, it is no surprise that he reclaimed the motif of the shoe, the early embodiment of his dreams and achievement of fame. So, like all of his greatest images, the shoe carries a note of the self-portrait.

Given this personal dimension, and the dark radiance of the Diamond Dust Shoes, it is not farfetched also to acknowledge the probable sexual, fetishistic, and voyeuristic import for Warhol in the image. Furthermore, the fixation upon glamorizing the lowest appendage of the human anatomy is an intriguing echo of the high/low dichotomy of Pop Art itself.

Regardless of the multiplicity of suggestion, one thing is clear: the brilliantly colored footwear floating across sonorously black grounds, the love of the artifice of high style, and the glittering surfaces – signifying magic and money – imbue Warhol's Diamond Dust Shoe paintings with the powerful resonance and electricity of his greatest works. 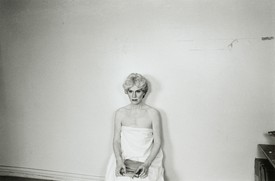 An exhibition at Vassar College brings together almost one hundred works by Andy Warhol that highlight the methods and aesthetics of the artist’s portraiture.