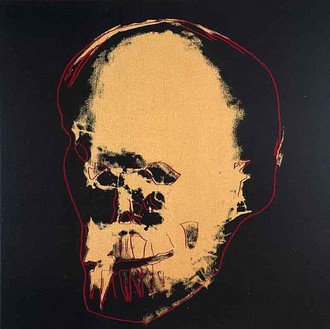 Gagosian Gallery is pleased to announce an exhibition of an important selection of Andy Warhol's Philip's Skull paintings. Warhol completed these works in 1985, using silkscreens made from CAT-scan films of the skull of Philip Niarchos, who commissioned the artist to paint his portrait.

Warhol's decision to use the CAT scans as a motif of portraiture is extremely rich in connotation. While Philip Niarchos had been a friend of the artist for many years, he also epitomized for Warhol the upper crust of the international jet set, the clientele he had sought since the 1970s for his financially lucrative society portraits. Therefore, the CAT-scan paintings are not only references to the tradition of memento mori painting, but also to his own production of the vanity portraits of high society. In addition, the CAT-scan images refer back to the large ensemble of Skull Paintings and his many self-portraits with skulls that Warhol had painted nearly a decade before.

Of course, all these permutations of the image of the skull figure prominently in the themes of death and disaster present in Warhol's entire body of work beginning in the early 1960s, including his portraits of movie stars and celebrities viewed as commodities and as articles of mass consumption. The paintings of Philip's Skull are especially relevant to this theme of fame-as-death, one of the great motifs in Warhol's career.

Like nearly all of Warhol's work, the Philip's Skull paintings have their root in photography, since most of his silkscreens were made from photographs, many of them borrowed from other sources. The same is true, of the medical CAT scans of Niarchos' cranium and brain. But from these dry, borrowed, or even morose sources, Warhol creates works of art full of resonance, from the connotations of the dark side of human existence, to the wildly brilliant display of painting and color, celebrity and extravagance.