treatise on the veilcy twombly at the morgan

On the occasion of the Morgan Library and Museum’s exhibition of Cy Twombly’s monumental painting Treatise on the Veil (1970) and related drawings, Gagosian director Mark Francis speaks with Isabelle Dervaux, Acquavella Curator of Modern & Contemporary Drawings at the Morgan. 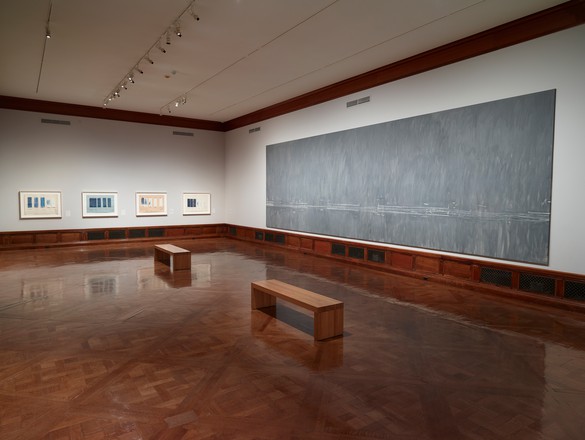 Mark FrancisCy Twombly’s enormous painting Treatise on the Veil (1970) looks wonderful in the rooms of the Morgan Library. How did you come to do the exhibition there, with its attendant studies?

Isabelle DervauxThis focused exhibition—one painting and twelve drawings—fits into the program of exhibitions of modern and contemporary drawings that the Morgan has developed in the last ten years or so, which is devoted to the work of twentieth century artists for whom drawing was an important medium and who have made a particular contribution to its history.

In addition, the Morgan has a special partnership with the Menil Collection in Houston, which is also committed to the study and presentation of modern drawings. The display at the Morgan of Twombly’s Treatise on the Veil painting and drawings—which all belong to the Menil—is part of an exchange of exhibitions between the two institutions.

MFTreatise on the Veil has not been seen in New York for many years. It has references to traditional iconography to do with drapery, veiling and the myth of Orpheus, who was an inspirational cultural figure for the artist. How does your program of contemporary exhibitions relate to the history of the Morgan’s own collections?

IDThe program of contemporary exhibitions at the Morgan is intended to show how drawing today is part of a history of drawing that began in the fifteenth century—a history that is particularly well represented in the Morgan’s collection. Twombly’s interest in literature, history, and mythology evidently makes him a particularly good fit for the Morgan, with its extraordinary collections of rare books and manuscripts. But most major contemporary artists are interested in the art and culture of the past. Matthew Barney, whose drawings we showed last year, found in the Morgan’s collections old master drawings, books, and medieval manuscripts that related directly to his work and which were displayed alongside his drawings. Roy Lichtenstein, whose early 1960s black-and-white drawings were the subject of an exhibition at the Morgan a few years ago, loved visiting the Morgan. I think artists who have a particular interest in drawing are also likely to be the ones whose work relates in some ways to the Morgan’s collections.

MFThe great length of the painting and its linear and graphic quality has to do with measurement, and also with musical staves and notation. How do the smaller studies relate to this aspect?

IDThe works on paper include scribbled notations that are primarily numbers, either measurements (“246 × 176”; “4000 miles”) or numerical sequences: “1, 2, 3, 4,…”; ”2, 4, 6, 8”; and the enigmatic “40, 30, 28, 18, 8, 2 ½,” which appears on most of the drawings. Whatever their reference, these sequences suggest time and rhythm. They also mark a lateral progression from left to right—a direction indicated by the words “in” and “out” inscribed respectively near the left and right edge of most of the drawings. These elements in the drawings offer clues on how to read the painting, which also bears the words “in” to the left and “out” to the right, inviting the viewer to walk along the canvas from left to right and perceive it over time, as one would a piece of music. 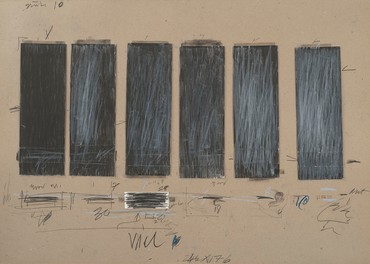 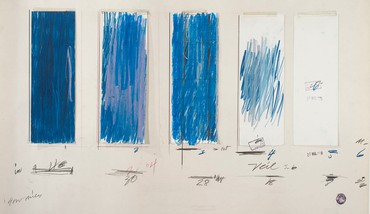 MFIt has recently been established that Twombly had in mind a particular piece of musique concrète by the composer Pierre Henry from the early 1950s, which amplified the sound of a cloth sheet being torn apart, and relates to the idea of the veil. Do you think that the experience of studying at Black Mountain College, where Twombly also knew the music of John Cage, continued to influence his work?

IDRegarding the reference to Pierre Henry, it also has to do with the notion of time, which, as much as the resemblance to musical notations, relates the painting to music. When Twombly referred to Pierre Henry’s musical composition The Veil of Orpheus as a source for Treatise on the Veil, he said that he had been struck by the very long sound of the tearing of a piece of cloth that opens Henry’s piece. To him, this seemingly unending sound materialized the concept of duration. I think Twombly tried to do the same thing in this painting. This is why the length of the canvas is so important—essential really to the meaning of the work. The lines and the scribbled notations evoke rhythm, sequence, and duration—which all connect the painting to music.

As for the experience of Black Mountain College, it was essential to Twombly for its interdisciplinary approach. He knew the music of John Cage, but also the poetry of Charles Olson. What he took from this experience remained with him throughout his career.

MFThe scale of this painting was unprecedented in Twombly's work up to 1970, or even in any American painting. How important do you consider his work of this period?

IDThe size of the paintings Twombly made during his so-called “grey-ground” period—from the mid-1960s to the early 70s—indicates the level of confidence he had reached at this stage of his career. It is an important moment because in the paintings from this period the combination of the expressive, gestural mode (as in the beautiful painterliness of the background of Treatise on the Veil) and of a conceptual, intellectual approach is particularly successful.

Artwork © Cy Twombly Foundation. Cy Twombly: Treatise on the Veil is on view at the Morgan Library and Museum, New York, September 26, 2014–January 25, 2015