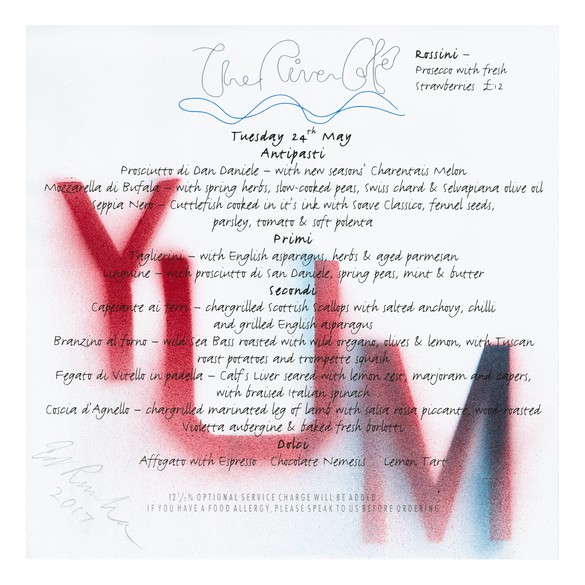 Derek Blasberg Three decades! That’s a long time in any industry, and especially in the fickle world of food. When you opened the River Café [with cofounder Rose Gray], did you think it would still be here thirty years later?

Ruth Rogers When we opened, we were both totally inexperienced. We had a very small place that provided a lot of restrictions, and looking back I can see that those restrictions were good for us. We were only open at lunchtime and could only feed the local artists, architects, and designers. It was financially terrifying at the time, of course, and we didn’t make any money, but we were able to grow with the restaurant, which was terrific training.

DB I’m not a foodie person, in the sense that I don’t read restaurant recommendations. But the River Café was suggested to me so often, and through the worlds of fashion designers and contemporary artists. Why do you think that community has taken to you and your food so much?

RR It’s a dramatic and beautiful place, and on the river. My husband [the architect Richard Rogers] designed the interior so everyone would have a view outside. Someone described the restaurant to me the other day as a place with a welcoming kind of energy. The people who work there really like to work there, the people who eat there really want to eat there. There’s a familiarity, too—I think restaurants need some drama and theatricality, but you also want to be comfortable. Since the day we opened, we wanted Italian food based on seasonal ingredients—regional Italian food. Generous portions. Our goal for the restaurant is that everyone should leave happier than when they arrived. 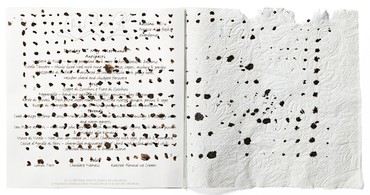 DB I was there recently when the Newhouse family threw a dinner party for Edward Enninful, the new editor-in-chief of British Vogue, which was a fun occasion. What’s one of your most memorable nights there?

RR I don’t like to name names about people who come into the restaurant, but one year, and this may have been about 1989, it was my birthday and Rose Gray got a Cajun band to come over and play. That night there was a dinner for Ed Ruscha in the restaurant too, and I thought, “We’d better get rid of this band before he arrives.” But he walked in and said, “I love these guys, can we get them to stay all night?” I’m happy that so many artists come in here. 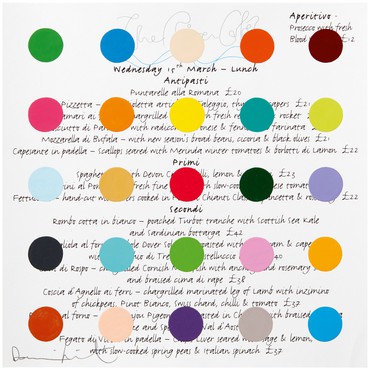 DB I’ve seen some menus that artists have drawn on. How does that happen?

RR The first artist who drew on a menu was Ellsworth Kelly, who came in for lunch and did a still life drawing of his table, with his glasses and wine glass on the table. I think he was quite pleased with it because he took another menu and went into the men’s toilet and did a self-portrait in the mirror. A little while later, Cy Twombly came in for lunch, and it wasn’t my idea, I would have been far too shy to ask him, but someone at the table said, “C’mon, Cy, do something on this menu.” He wrote “I love lunch with Ruthie,” in his remarkable scrawl. Those three menus became my most treasured, precious possessions, and I kept them, of course. When we were doing this new book I thought, “Damien Hirst, his studio is nearby and he comes in here, I wonder if he would do one?” So I asked him, saying Cy and Ellsworth had done them and would he ever consider it? Later I asked Peter Doig, Brice Marden, Michael Craig-Martin, Jonas Wood, and Ed Ruscha, who are all part of the River Café family. I texted them, saying, “If you don’t want to, please forget I ever asked,” but their generosity of spirit was incredible. Brice did one on a paper towel, Peter did a lion and two spearfishermen, Michael a coffee cup, Jonas a plant, and Ed a beautiful “Yum.” 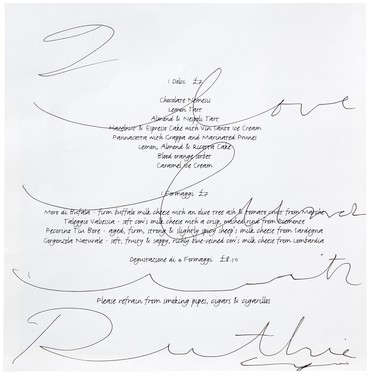 DB Was there anyone you wish you’d asked but didn’t?

RR Yes, there are so many artists I admire, but there were deadlines and space to consider. Lucian Freud used to come to the River Café in the very beginning. He always told me he liked it best when it was small, when all we could afford was secondhand furniture. Once he wrote me a blank check. It was made out to Ruthie Rogers and signed Lucian Freud. I put it somewhere safe, which is to say I can’t find it now.

DB I’m the world’s worst cook. I need a recipe for ice. I have your book right here: what’s the easiest thing for me to make?

RR Well, if you like ice, I’d suggest the blood orange sorbet, which is literally freshly squeezed juice, some sugar, maybe a little lemon. You can do that. 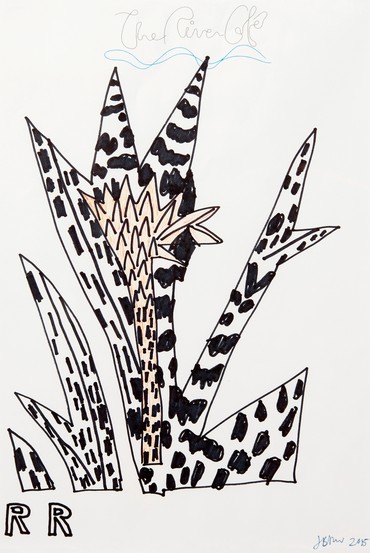 DB I had dinner with you at a friend’s apartment a few weeks ago. I was early and hanging out in the kitchen while my friend prepared the food, and when they said you were coming I asked, “How are you not panicking right now?” I’d be too shy to make you dinner.

RR Don’t be ridiculous! I’m the easiest to cook for. I’m so appreciative when someone makes that effort. It’s one of the most generous things someone can do.

DB At that dinner, someone told me that Harvard Business School did a study of your business and gave you a few options on how to handle it going forward. What were they?

RR These Harvard students came to me with a question: how could the River Café expand? After all, it’s unusual for a restaurant to be successful for thirty years without expanding into other cities or other restaurants. They came back with four propositions: replicate another restaurant; do less expensive versions as multiples; do a product, like ice cream, that can be sold in stores around the world; and the last option was, do nothing.

DB I think I know which one you did. The last one?

RR Sort of. We’re interested in doing projects. In October we’re doing a pop-up restaurant at the Frieze Art Fair, and for Christmas we’ll be selling gift boxes, the alternative to the traditional hampers, with all of my favorite ingredients: just-pressed olive oil, Pugliese tomatoes, and a special new cookbook with recipes using the box ingredients. The Harvard study was invigorating, they were the smartest students ever, and very inspiring.