Say goodbye, Catullus, to the Shores of Asia Minor

From 1953 until his death, in 2011, Cy Twombly inscribed handwritten notations into his works, and from 1959 onward these were mainly literary quotations from 111 different authors.1 Speaking of the inscriptions in Untitled (Say Goodbye, Catullus, to the Shores of Asia Minor),2 the painter Brice Marden has said, “I find that reading [the writing] really informs the rest of the image . . . it becomes so much a part of the image; it isn’t a distinct separate thing.”3 Begun in Rome in 1972, completed in Lexington, Virginia, in 1994, and first exhibited at Gagosian, New York, that same year, the work carries ten inscriptions from eight sources.4 Even its title is a quotation: “Say good-bye, Catullus, to the plains of Asia Minor” is a line from “Carmen 46” (Song 46), titled “Farewell to Asia,” by the first-century-BC Roman poet Catullus, though Twombly replaces the original word “plains” with the liminal “shores.”5

Catullus’s verse virtually electrified Twombly: “The sound of ‘Asia Minor’ is really like a rush to me, like a fantastic ideal.”6 Yet the painting itself, he said, referred not to “Carmen 46” but to “Carmen 101,” an elegy for the poet’s brother. “Catullus went to Asia Minor to see his brother, and while he was there his brother died, and he came back on this little boat. I found the idea of Asia Minor extremely beautiful. Saying goodbye to something and coming back on a boat.”7 According to Twombly, the painting should be read, contrary to Western convention, from right to left—from east to west, that is, like Catullus’s solitary return from Asia Minor to Rome, or like Twombly’s own journey with his monumental painting from Rome to Lexington.

I think of the painting’s movement as falling. . . . It cascades and it exits on the left. The painting is about life’s fleetingness. It’s a passage.

Read in this way, the painting, a work of three abutting panels, opens at top right with fragments of lines from Rainer Maria Rilke’s “Tenth Duino Elegy” (1922), in blood red, and set there like a motto: “How you gaze / beyond / on bitter duration / the bitter duration / to See an end / ( . . . ) our winter / our dark evergreen / Our dear / duration / Our time.”8 The fragment from the second of George Seferis’s Three Secret Poems (1966) at the bottom-right edge also evokes death: “and yet there on / the other Shore / under the dark gaze / Sun in your eyes / You were there / the other side / the other dawn / the other birth / & yet there you were / in the vast / time / drop by drop.”9 To the left, below the painting’s center, we read Rilke’s verse “His Mortal heart / presses out / an inexhaustible / wine / wine / wine” (Sonnets to Orpheus, 1922); and to the left of that lies a fragment by Archilochus, from the seventh century BC: “In the hospitality of War / we left them their dead / as a gift to remember / us by.”10 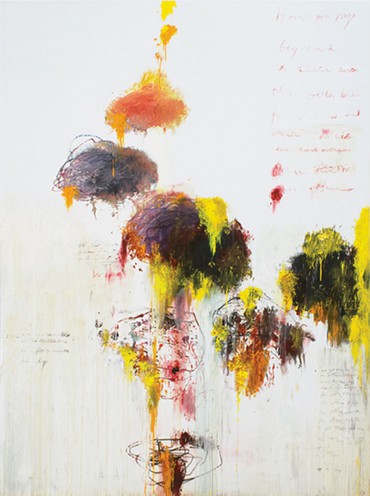 The central canvas shows remnants of phrases that Twombly once considered possible titles for the work: “Idleness,” from the line “On mists in idleness,” by the Romantic poet John Keats, as well as “The Anatomy of Melancholy” and “The Aatomia of melcholia,” references to Robert Burton’s Anatomy of Melancholy (1621).11 (When shown at Gagosian in 1994–95, the work was simply called Untitled Painting.) To the right we find the concluding lines from Rilke’s “Tenth Duino Elegy”: “and you who have / always thought of / happiness rising / would feel the / emotion / that almost over / whlmes / whenever happines falls,” as well as the fragment “( . . . ) of AiR,” from Rilke’s “An die Musik” (On music, 1918). Next to an aimlessly spinning circle of lines, symbolizing the passage from life to death, the word “[me]mory” forms the transition from the eruptive cascades of color at the right to the grisaillelike, Cimmerian, left-hand part of the painting.

For Twombly, the pictorial space of his Catullus canvas was “a loose gravitation comparable to mythology itself which also has no center of gravity.”13 At the transition to the work’s left-hand panel, floating vertically down through this aperspectival, centerless space, unknown to Western pictorial aesthetics, are verses from Rilke’s “Ninth Duino Elegy” (1922):14 “this fleeting world / Which in Someway / Keeps calling to us / Us the most / fleeting of all / Once for each thing / Just once no more / And we too, Just / once / and never again / But to have / Been / this once / completely / even if only / once.”15 Below come lines from Seferis’s “Automobile” (c. 1931): “high & light / how the dizzininess / slipped away / like a fish / in the sea.”16 Partly interwoven with these wander erratic inscriptions: the name of the Greek musician “orpheus” and the names of three Egyptian deities, “khonsu,” “amun,” and “maat.” 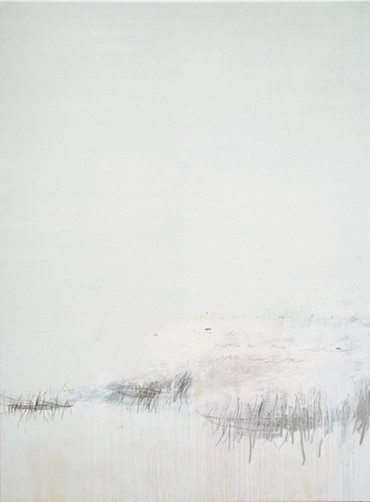 Between shrill eruptions of color and boats that disappear into a gray nothingness, Twombly’s inscriptions span a panorama in some ways similar to a parable, encompassing farewell, affirmation, mourning, and crossing over. The prevalent themes, elevated to the status of myth, are Catullus’s “saying goodbye to something and coming back on a boat,” Orpheus’s descent to the underworld,19 Twombly’s own journey on the Nile, and his homecoming to Lexington in 1993. The canvas, fifty-two feet long, which he worked on for over twenty years, for Twombly symbolized a journey through life and toward drifting into death. “I think of the painting’s movement as falling. . . . It cascades and it exits on the left. The painting is about life’s fleetingness. It’s a passage. It starts on the right and as you move to the left it just goes out.”20 Untitled (Say Goodbye, Catullus, to the Shores of Asia Minor) is a painted and written trace of life, of our being here, and of our bidding farewell—for Twombly, “a passage through everything.”21

8Rainer Maria Rilke, “Tenth Duino Elegy,” 1922, lines 11–14, from The Selected Poetry of Rainer Maria Rilke, ed. and trans. Stephen Mitchell, with an introduction by Robert Hass, bilingual edition (New York: Vintage International, 1989), p. 205, or Ahead of All Parting: The Selected Poetry and Prose of Rainer Maria Rilke, ed. and trans. Mitchell, bilingual edition (New York: The Modern Library, 1995), p. 389. Here and below, quotations in the painting are given in the artist’s spellings (sometimes incorrect) and showing his strikethroughs. ( . . . ) means the writing is indecipherable.

9George Seferis, Three Secret Poems, “On Stage,” 1966, V, lines 1–10, from George Seferis: Collected Poems, ed. and trans. Edmund Keeley and Philip Sherrard, 1982 (rev. ed. Princeton: Princeton University Press, 1995), p. 205. It is possible that it was the lines “and yet there on / the other Shore” that inspired Twombly to change the Catullus quotation from “the plains of Asia Minor” to “the shores of Asia Minor.” 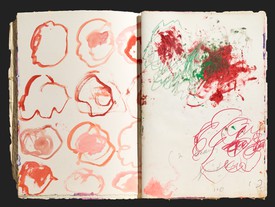 Cy Twombly: In Beauty it is finished

Mark Francis, director of the exhibition Cy Twombly: In Beauty it is finished, Drawings 1951–2008, describes the impetus for this expansive presentation, the source for its title, and details the stories of some of the works on view.