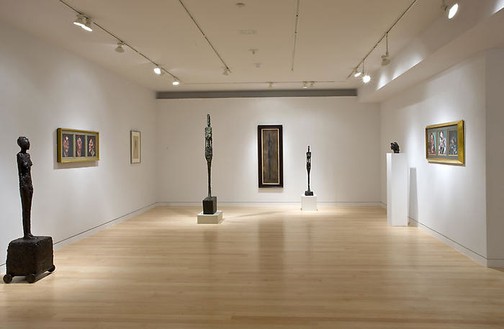 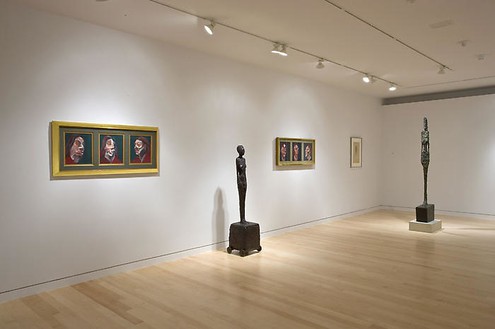 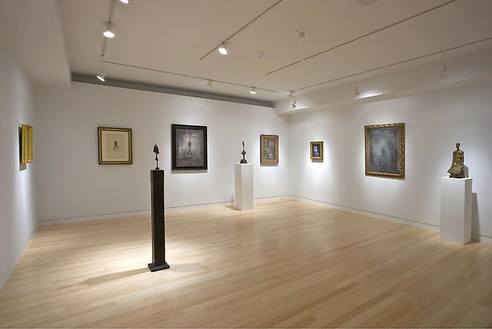 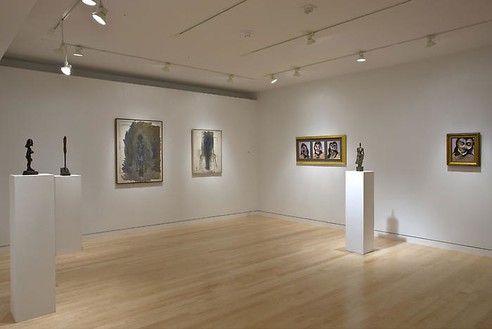 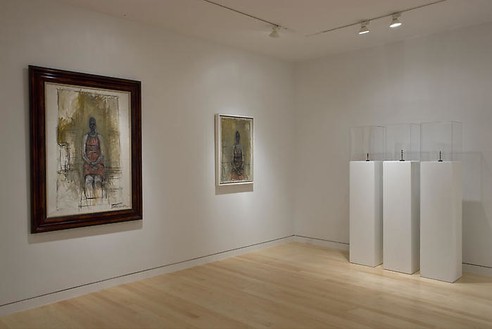 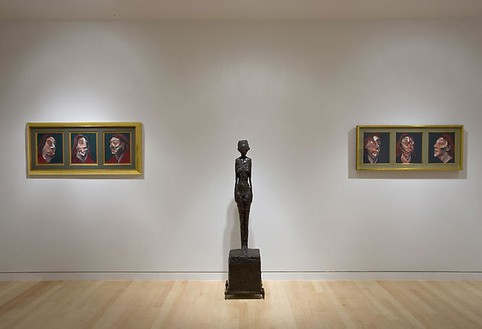 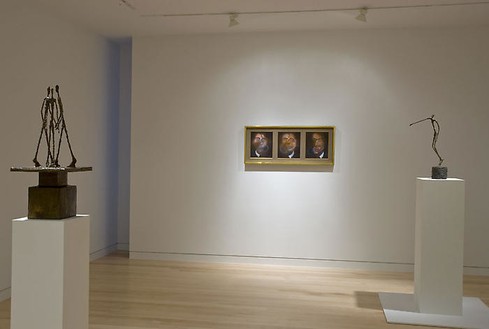 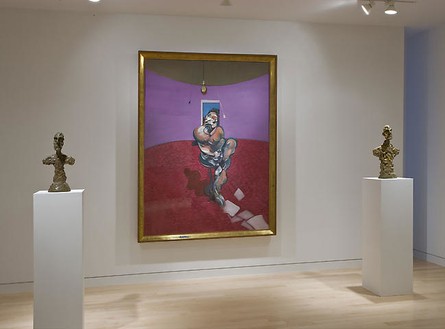 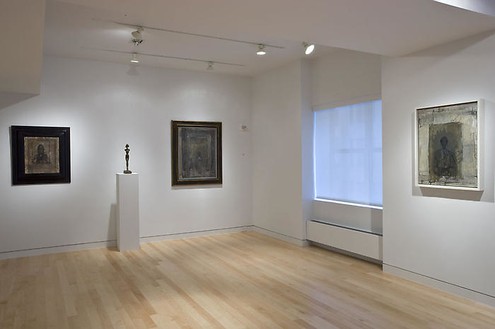 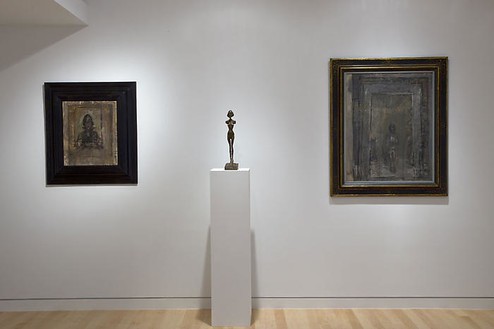 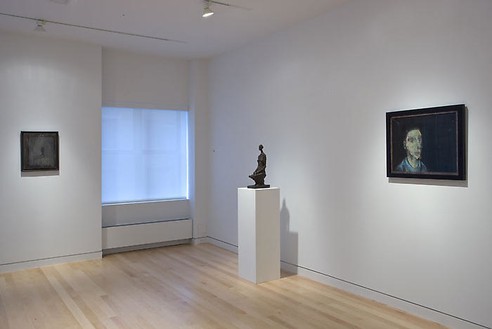 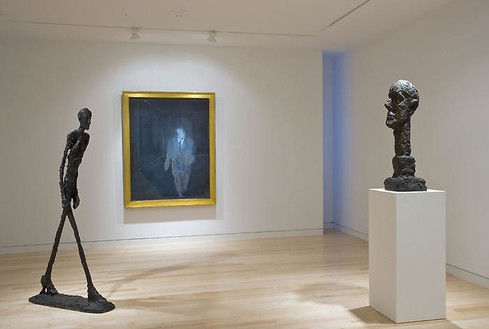 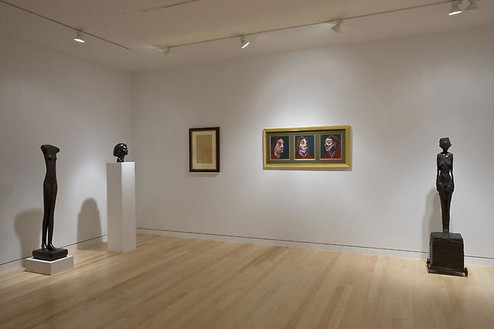 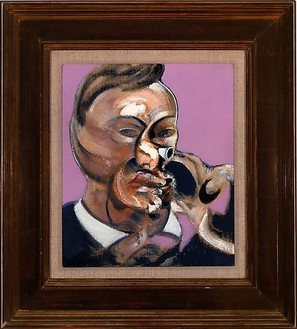 To make a head really lifelike is impossible, and the more you struggle to make it lifelike the less like life it becomes.
—Alberto Giacometti

Gagosian is pleased to present Isabel and Other Intimate Strangers: Portraits by Alberto Giacometti and Francis Bacon. This exhibition brings together important loans and rarely seen works from international museums and private collections, including the Fondation Alberto et Annette Giacometti, Paris; the Metropolitan Museum of Art, New York; the Museum of Modern Art, New York; the Nasher Collection, Dallas; the Detroit Institute of Arts; and the Sainsbury Collection, Norwich, England. It explores the enduring fascination of Giacometti and Bacon with the existential challenges and ineffable mysteries of the human figure and psyche, explored throughout their careers in the portraits, or likenesses, that they produced of close friends and family.

One such subject was the model and muse Isabel Rawsthorne, a compelling figure of consuming vitality and recklessness. While Rawsthorne generally made an instant and overwhelming physical impression on people, over time her effect on Giacometti produced profound conflictual responses in him. Beyond the clearly identified bronze busts of her such as Tete d’Isabel I and II (1936 and 1937–38, respectively), his female standing figures, from Femme qui marche (1932–36) to the diminutive pedestal sculptures and the Amazonian Grandes Figures, are said to have been inspired by his vision of her standing some distance away from him on a street one night, distant and imperious. Isabel’s relationship with Francis Bacon was quite different, that of kindred spirit and drinking companion rather than muse, yet her distinctive presence is one that haunts his work, like that of Giacometti before him. One of Bacon’s finest pictures, Isabel Rawsthorne Standing in a Street in Soho (1967), is based on a fleeting memory of her, while in the high-keyed, viscerally rendered triptychs Three Studies for a Head of Isabel Rawsthorne (1965 and 1965), Bacon’s perennial struggle with experience and its depiction plays itself out in what he described as “shifting sequences where one picture reflects on the other continuously.”

Giacometti’s most enduring and remarkable relationship was with his younger brother Diego, the subject of his first sculpture, Testa di Diego, completed when he was just thirteen years old. Companion, consultant, and studio assistant, Diego became his brother’s favorite model and male archetype. Giacometti’s wife Annette, the subject of hundreds of paintings and sculptures, and his professional model and mistress Caroline would become similarly pervasive referents, inspiring more subjective variations on the feminine form, from the tiny yet shapely bronze Figurines (c. 1954–56) and seated sculptures (Femme Assise, 1956) to paintings such as Annette (1952) and Caroline dans sa robe rouge (1965).

During the 1960s, Bacon, who had made very few named portraits in the first half of his career, concentrated increasingly on himself and a handful of close friends as his subjects—from his boyfriend George Dyer to Lucian Freud, Muriel Belcher (who ran The Colony Room, Bacon’s favorite drinking club), and Henrietta Moraes. Bacon said that he thought of friendship as “two people pulling each other to bits” and, in his unsettling portraits, he vivisected his friends in no uncertain manner.

Isabel and Other Intimate Strangers will be accompanied by a full-color publication with essays by Véronique Wiesinger, director of the Fondation Alberto et Annette Giacometti in Paris, who is also responsible for the catalogue raisonné of Alberto Giacometti; and Martin Harrison, director of the project for the catalogue raisonné of the work of Francis Bacon. The Fondation Alberto et Annette Giacometti has overseen the selection of Giacometti works for this exhibition.

The exhibition inaugurates Gagosian’s fourth-floor galleries at 980 Madison Avenue. It also coincides with the first major survey of Alberto Giacometti’s work in Russia, opening at the Pushkin Museum in Moscow on September 16, and Tate Britain’s historic exhibition marking the centenary of Francis Bacon’s birth (September 8, 2008–January 4, 2009).