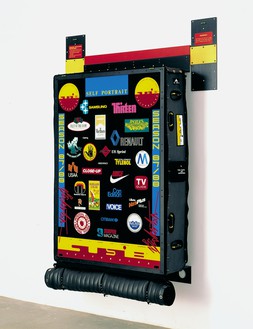 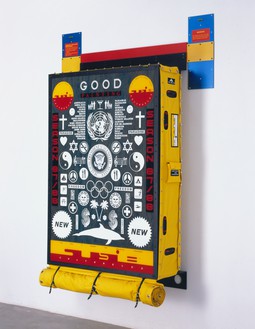 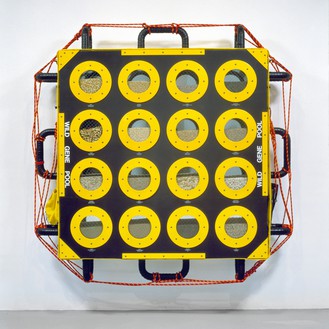 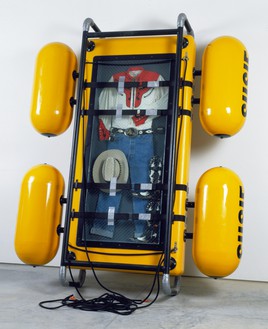 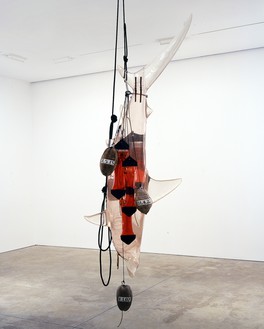 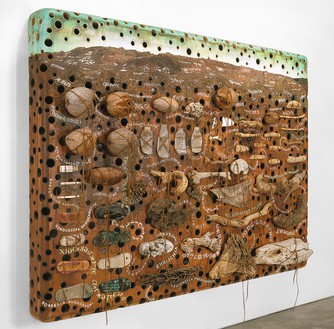 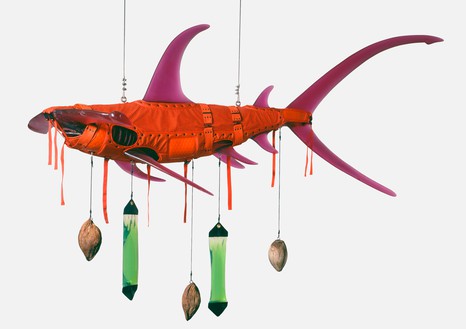 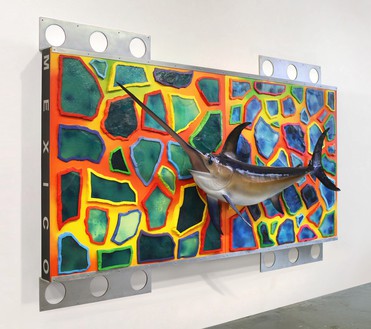 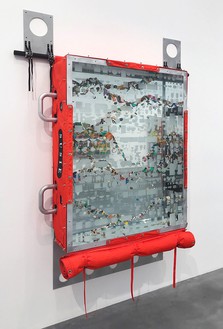 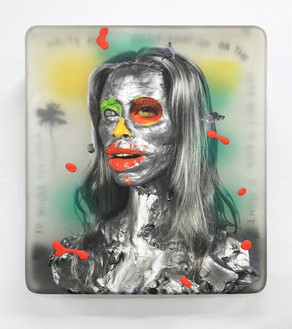 Ashley Bickerton, Painting Thing: To Where the World, 2019 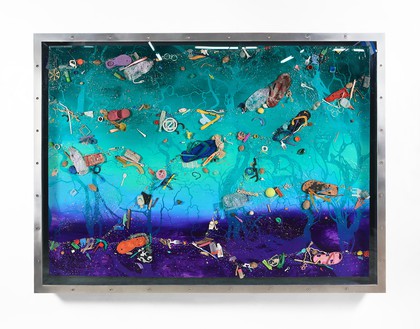 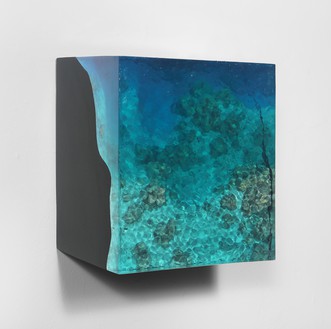 Ashley Bickerton rose to prominence in the mid-1980s with a succession of ironic, abstracted constructions focused on questions of consumerism and identity. Establishing his own (pointedly “feminine”) brand, Susie, Bickerton manufactured knowingly impersonal “self-portraits,” juxtaposing his imaginary company’s logo with various real-world examples. The works’ corporate aura is further enhanced by their elaborate steel, leather, and rubber façades. He has also produced “still lives” incorporating digital screens that display their own fluctuating market value, satirizing art as the object of commercial speculation. And since relocating to the Indonesian island of Bali in the early 1990s, Bickerton has explored cultural dislocation in paintings and sculptures with an ornate, handcrafted aesthetic.

Bickerton was born in 1959 in Barbados, West Indies. He received his BFA from the California Institute of the Arts in 1982 and graduated from the Independent Study Program of the Whitney Museum of American Art, New York, in 1985. The following year he was included, with Peter Halley, Jeff Koons, and Meyer Vaisman, in an exhibition at Sonnabend Gallery, New York, that helped cement his association with the city’s emergent Neo-Geo movement (though he felt a closer affinity with the contemporaneous Commodity Art and Neo-Conceptualist tendencies). Many of his works of the period—including such series as Abstract Painting for People (1986), Wall Wall (1986–88), and Landscape (1988)—have structures that suggest packing crates or carrying cases, alluding to prosaic function but lacking a clear purpose beyond self-promotion and self-protection.

In 1993, Bickerton’s work took a self-consciously “exotic” turn when he relocated to Bali. Its elaborate styling and tongue-in-cheek feel contrast sharply with the conceptual detachment of his previous output, though a slippage between mediums, genres, and subjects remains in evidence. Employing polished figuration to parody Western fantasies of a hypersexualized expat life, Bickerton depicts himself, his family, and his friends in lurid colors, introducing the grotesque “blue man” character as an archetypal European male in an “othered” tropical setting; he is, in the artist’s words, “lost and adrift in an alien twenty-first century, awash in a whole other set of sociocultural and psychological metrics—ones that he is clearly unable to grasp.”

Since the early 2010s, Bickerton has brought his practice full circle, synthesizing its heterogeneous modes and gestures into an all-encompassing visual language. In the Ocean Chunk series, originally conceived of in New York shortly before his move to Bali, he uses resin and fiberglass to create the impression of water, while in the Flotsam series of mixed-media paintings, he employs the framing devices of his earlier work to recontextualize objects—such as ocean-borne waste and assorted marine gear—in a way that contradicts their natural milieux. The industrial trappings of Bickerton’s 1980s and ’90s productions also find their way into the Vector series, in which various forms of hardware appear alongside logos that recall his early works’ detached focus on commerce. However, far from trumpeting a reductive opposition between nature and technology, the series navigates our exploitation of natural resources while implying that the planet will outlast humanity’s disruptive impact. 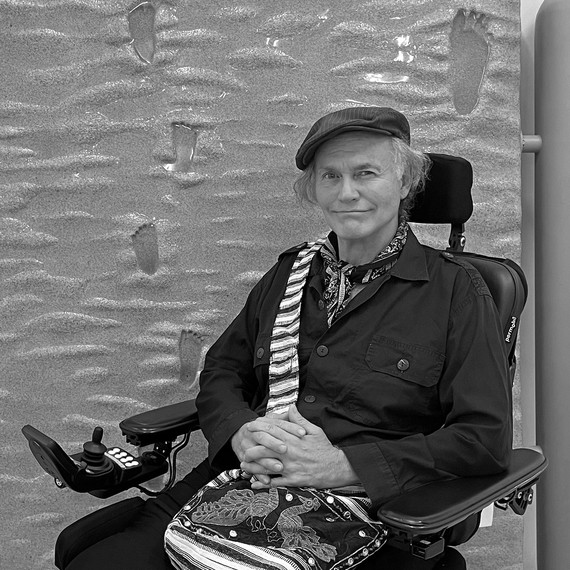 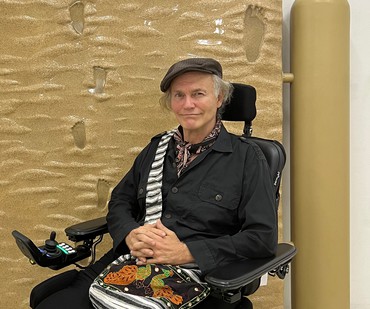 Gagosian is pleased to announce the gallery’s representation of Ashley Bickerton. The artist’s first solo exhibition with the gallery is scheduled for 2023 at Gagosian New York.

Originally identified with the Neo-Geo tendency of the late-1980s scene in New York, Bickerton made his name with ironic, abstracted constructions focused on ideas of consumerism, identity, and value. When Bickerton relocated permanently to the Indonesian island of Bali in 1993, his work took a self-consciously “exotic” turn. Its tongue-in-cheek feel and ornate, crafted look contrast sharply with the conceptual detachment of his previous output, though a slippage between mediums, genres, and subjects remained. Over the past few years, Bickerton has brought his practice full circle, synthesizing its heterogeneous modes and gestures into an all-encompassing visual language.