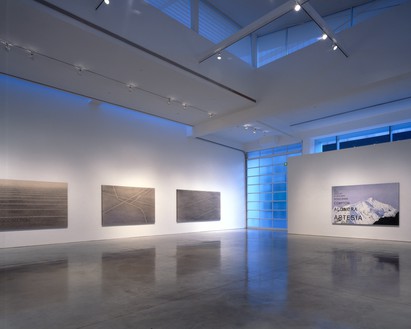 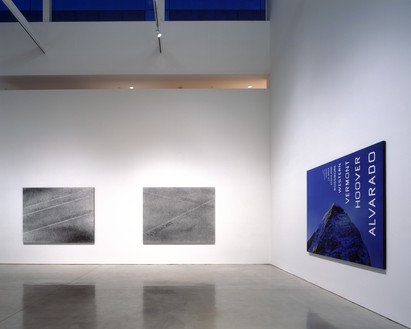 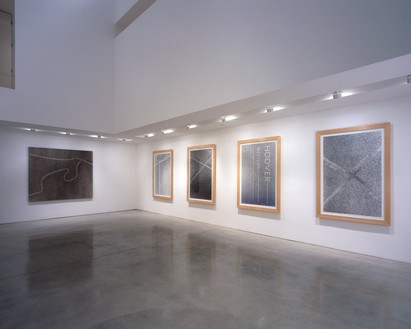 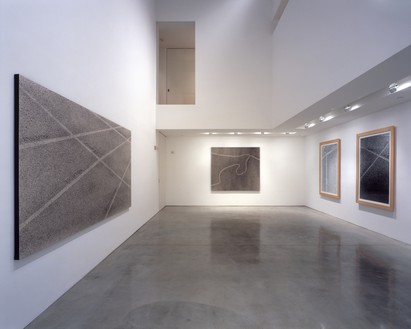 Gagosian is pleased to present new paintings by Ed Ruscha. Internationally renowned as the quintessential Los Angeles artist, Ruscha recently completed a mural-size painting for the new Getty Center. Gagosian represents the artist exclusively and this exhibition will be his first in his hometown since 1985.

Continuing Ruscha’s fascination with urban landscapes, these new works depict simplified street maps of Los Angeles and are reminiscent of his City Lights paintings (1985–86), which show the city from above at night, as though from an airplane window.

In Ruscha’s new paintings, the city is again seen from above, but now in the form of street maps and blow-ups of its neighborhood sections. With a small curving line to represent a boulevard, set against a blankness that represents the city, the printed names of Los Angeles streets become particularly resonant and suggestive.

These street map paintings bring to mind the famous Thomas Guide books known to virtually every driver in Los Angeles. The car thus becomes an unseen but referenced subject, just as it was in Ruscha’s famous 1966 photographic panorama, Every Building on the Sunset Strip. The paintings also strike a particularly zany balance between the calm and simple assurance of the map, and the chaotic and bewildering city lying somewhere beyond the printed page or, in this case, beyond the painted picture.

A fully illustrated catalogue will be available, with an essay by Dave Hickey, an early commentator on Ruscha’s work. Hickey is also the author of a recent and acclaimed collection of essays entitled Air Guitar, and was the 1994 recipient of the Frank Jewett Mather Award for Distinction in Art Criticism.