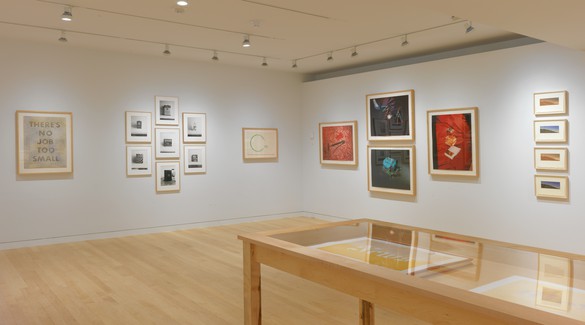 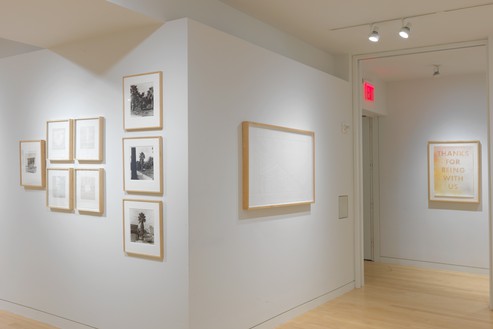 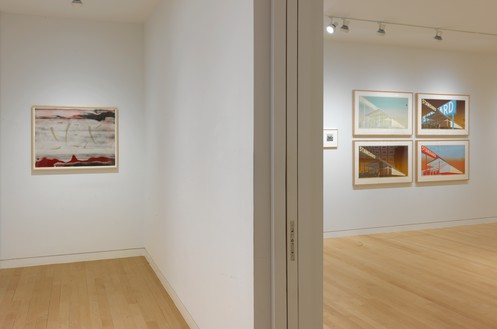 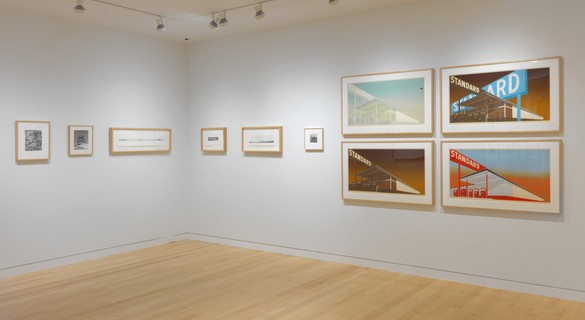 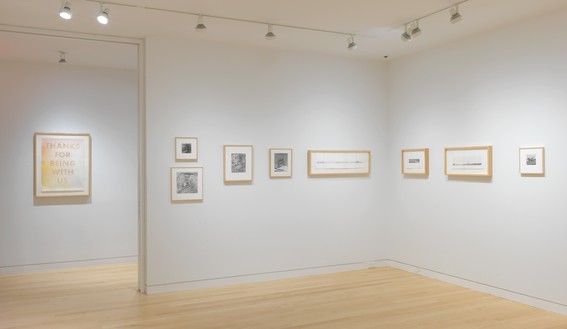 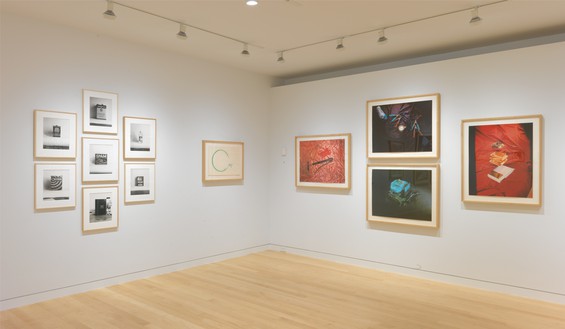 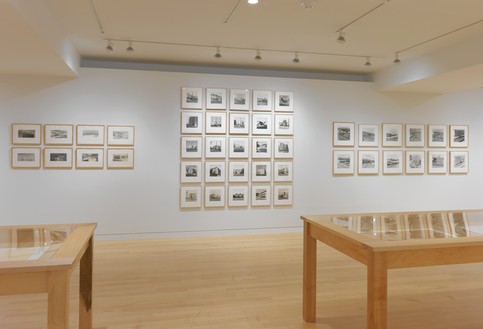 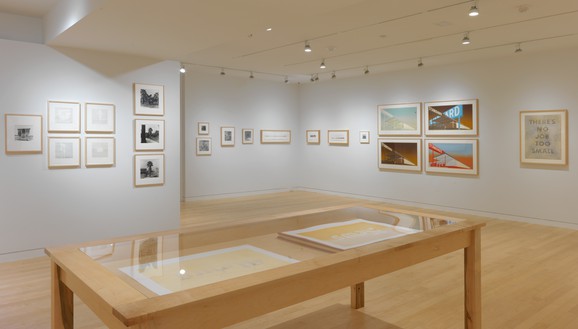 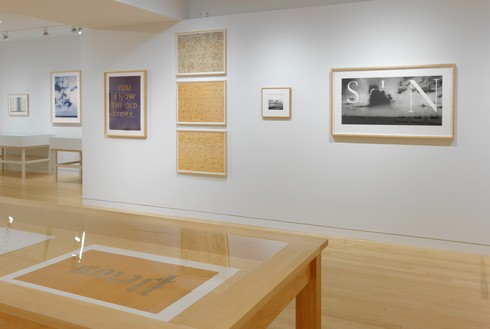 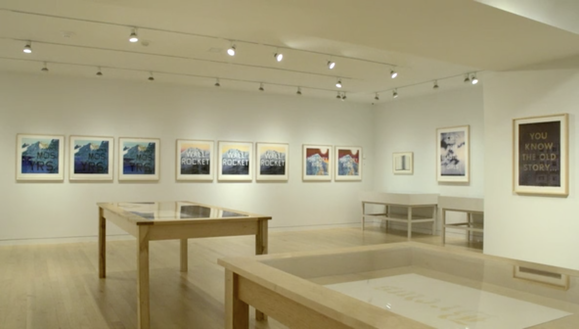 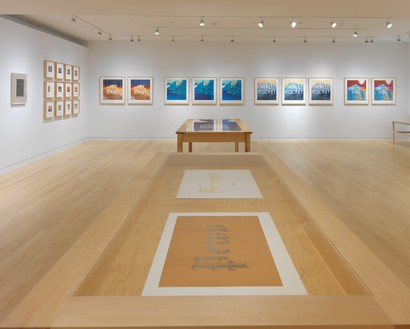 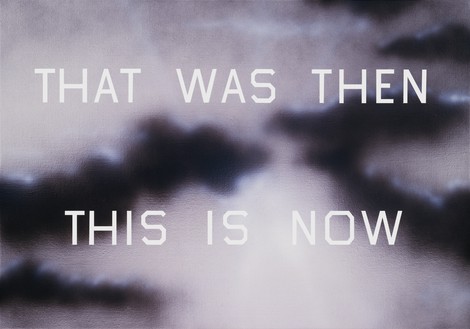 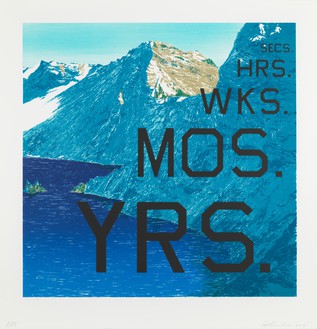 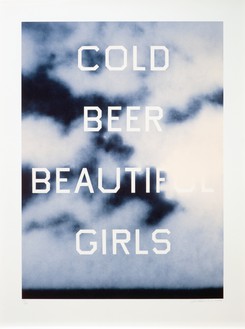 This exhibition, organized by Gagosian director Bob Monk, surveys Ruscha’s prints of the past forty years, together with rarely seen photographs produced since 1959.

Ranging freely and dexterously across traditional, unconventional, and sometimes even comestible materials, Ruscha’s prints are a fluid forum for the spirited investigation of what a limited-edition artwork can be. His absorption and rethinking of the requirements of each graphic procedure and format result in step-by-step transformations, in a process that echoes the eternal return of the subjects that make up his broader oeuvre. Ruscha arrived in Los Angeles in 1956 to study commercial art at the Chouinard Art Institute (now CalArts), and underwent a six-month apprenticeship with a printer beginning in 1958. Attracted to the reproducibility, collaborative processes, and happy accidents specific to printmaking, he began to create a wealth of lithographic editions, infusing the Pop and Conceptual sensibilities of the time with vernacular wit and melancholy. His exquisitely refined prints engage a breadth of formal themes, from text and typography to still life and quotidian architecture, played out in a spirit of rigorous yet restless experimentation.

The quartet of gas stations Standard Station, Mocha Standard, Cheese Mold Standard with Olive, and Double Standard (1966–69) merge Euclidean space with Renaissance perspective and wordplay, while depictions of the Hollywood sign and its surrounding hills convey an attitude to the region’s landscape, at once scientific and romantic, natural and artificial. In Hollywood in the Rain (1969), the monumental sign forms part of a linear landscape in the style of early topographic illustrations, while the lithographic series Landmark Decay and Further Landmark Decay (2006) depict the letters in various stages of collapse. “‘Hollywood’ is like a verb to me,” Ruscha once said. “It’s something you can do to any subject or any thing.” Parallel to his output of paintings and drawings, Ruscha’s prints of the past four decades are random yet refined expressions of this unrestricted approach.

During the production of his second short film Miracle, for the first time Ruscha used photography as the basis for prints: the incongruously titled Tropical Fish Series (1975) presents banal tabletop still lifes against lustrous fabrics, from the bicycle pump, seltzer bottle, and Satan statuette of Air, Water, Fire to the chocolates, raw cuts, and bedsheets of Sweets, Meats, Sheets. These were propped up horizontally and photographed, then rotated during the silkscreening process to produce a vertical stack of plastic-wrapped subjects—an analog stunt that presaged digital magic. In a series of four works made at Tamarind Lithography Workshop the same year, he applied sprays of tusche ink to the lithographic plates to create background textures, atmospheres of dematerialized particles that coalesce into clichés—“THERE’S NO JOB TOO SMALL”; “YOU KNOW THE OLD STORY”; “THANKS FOR BEING WITH US.”

Final, Precise, and That is Right (1989) combines faint text with fleeting impressions of light filtered through window frames. In recent, richly colored lithographs, catchy yet meaningless terms, such as “WALL ROCKET” and “JET BABY,” are set against dramatic mountainscapes in scenic conflations of linguistic and visual appropriation; unique color trial proofs are presented side by side to show the evolutive process by which Ruscha decides for a final image.

Ruscha’s early photographs also provided foundations for his broader artistic practice. Isolating overlooked quotidian subjects, he used the camera to “flatten” the images he intended to draw and paint, from apartment buildings to comestibles and commodities such as raisins and bottles of turpentine. Exercises in the ambiguity of scale, such as Untitled (Newspaper Sculpture) (1959–60, printed in 2005) and Dodgers Stadium (1967, printed in 2013) reveal a common abstraction in small objects and large-scale architecture, while Joyce Wallace’s Automatic Table Arrangement (1962, printed in 2005) shows his compositional mind at work. Images of gas stations along Route 66 were collected in Twentysix Gasoline Stations (1963), the first of sixteen artist’s books produced between 1963 and 1978. Roof Top Views (1961) pictures local suburban streets from a high vantage point, while Roof Top Views 50 Years Later (2003) returns to the same locations to reveal neighborhoods only subtly changed by the sluggish pace of time, economy, and demographics.

Ruscha’s deadpan representations of archetypal signs and symbols distill the imagery of popular culture into cinematic and typographical codes that are as accessible as they are profound. His wry and sometimes obtuse choice of words and phrases draws upon the moments of incidental ambiguity implicit in the interplay between language and image. Although his inspirations are undeniably rooted in his close observation of the American vernacular, his elegantly laconic prints, photographs, drawings, and paintings speak to more complex and widespread issues regarding the appearance, feel, and function of the world and our tenuous and transient place within it.

Ruscha’s first public art commission in New York, Honey, I Twisted Through More Damn Traffic Today, was unveiled at the High Line on May 6, 2014, and will be on view through May 2015.