Sir John Richardson (1924–2019), son of Sir Wodehouse Richardson, was born in London. He studied at the Slade School of Fine Art, then began writing for the New Statesman, Burlington Magazine, and other British journals. In 1950 he and the modern art collector and scholar Douglas Cooper moved to a château in the south of France, where Picasso was a frequent visitor. In 1980 Richardson began writing A Life of Picasso. The first volume was published in 1991, the second in 1996, and the third in 2007. He was appointed Slade Professor of Art at Oxford in 1995 and knighted by H.M. the Queen in 2012. The fourth volume of his Picasso biography is forthcoming. 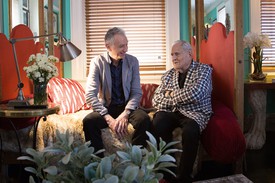 In Conversation
The Art of Biography: John Richardson and Jed Perl

Picasso biographer Sir John Richardson sits down with Calder biographer Jed Perl to discuss the dynamism of these two artistic geniuses, the inadequacies of fixed methodologies, and the importance of keeping a fresh perspective.