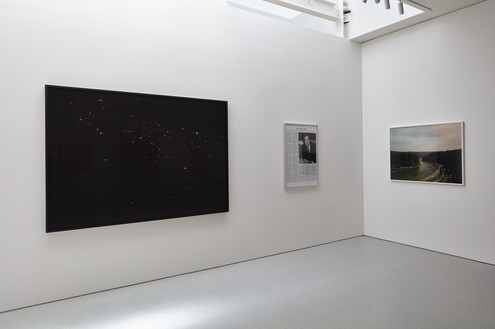 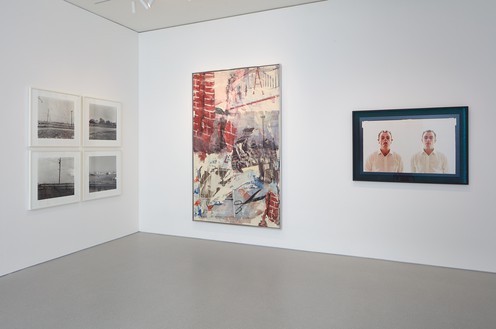 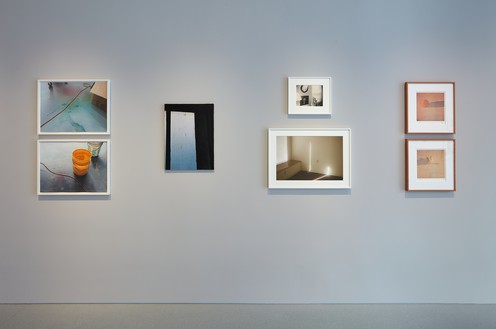 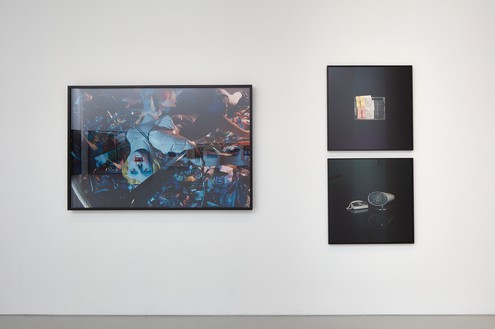 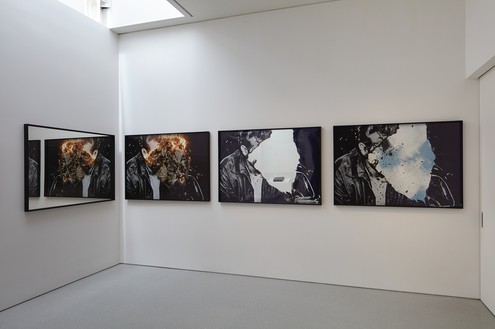 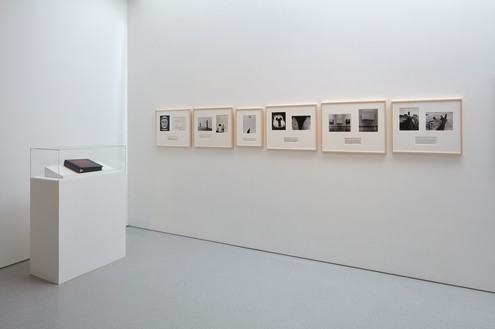 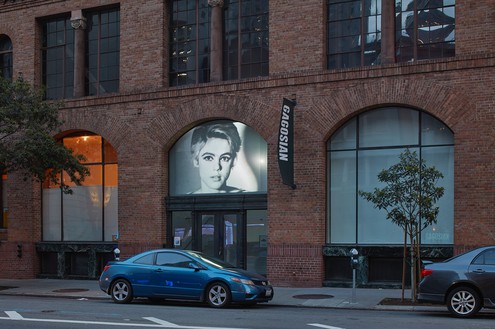 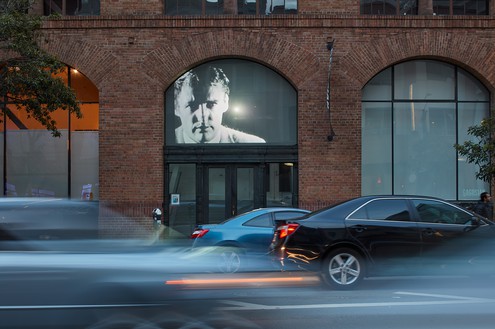 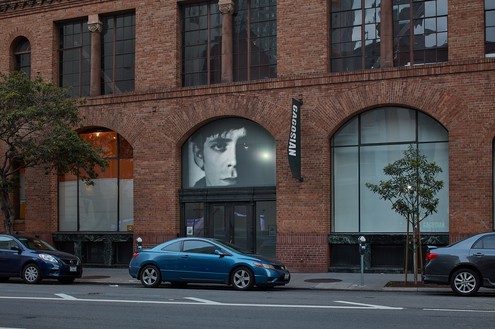 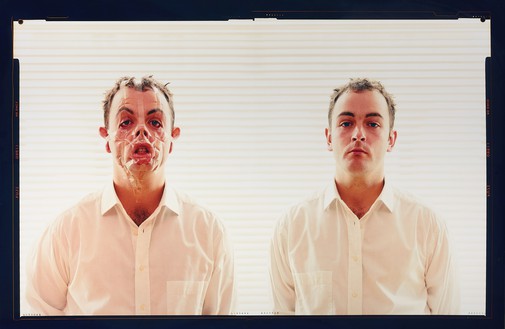 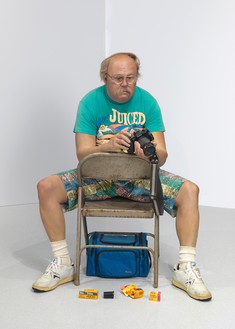 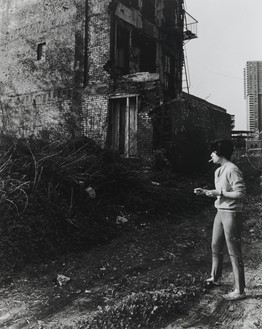 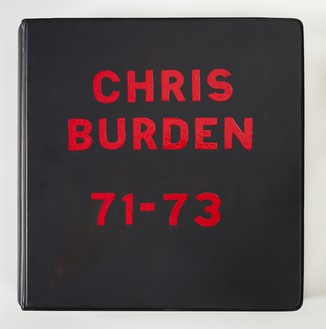 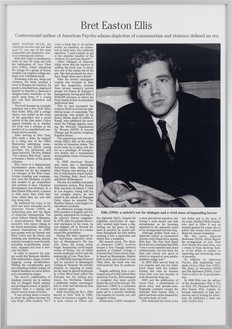 Gagosian is pleased to present About Photography, an exhibition by artists, modern and contemporary, who have exhibited with the gallery over the past four decades.

About Photography explores the ways in which artists use photography as a medium, a means to an end, and a catalyst for other art forms. From Andy Warhol to Richard Prince, these artists open up the question of what it means to utilize the photographic medium for representation, as well as in the creation of form. As intellectual challenges continue to unfold, photography pervades not only all other artistic genres, but our every moment as well, a phenomenon that has irrevocably changed the nature of art itself.

The exhibition’s only sculpture, Duane Hanson’s Man with Camera (1991–92), takes center stage: a figure perched on a folding chair poises his camera to take a photograph. Celebrated for their startling realism, Hanson’s figures and the “snapshot of America” that they constitute take on new meaning in a photographic context. Nearby, Andy Warhol’s Screen Test of Edie Sedgwick (1965) is projected on the entrance wall. Richard Avedon’s portraits of Louis Armstrong (1955), Bob Dylan (1963), Malcolm X (1963), and members of Warhol’s Factory (1969–75) create an interlocking narrative about photography and society, contrasting with both the aesthetics and implications of Hanson’s figure.

Fifty years after Diane Arbus began shooting her unsettling black-and-white portraits of ordinary Americans on a medium-format Rolleiflex, producing distinctive, square photographs, Richard Prince’s Untitled (portrait) (2015) borrows the characteristic text and cropping of an Instagram post. An avid documenter and collector of American subcultures, Prince uses mass-media images to redefine concepts of ownership and authorship. Here, his examination of the contemporary channels and distribution of the photograph stands in stark contrast to Arbus’s iconic portraits, including Identical Twins, Roselle, N.J. (1966).

While Ed Ruscha’s deadpan series Vacant Lots (1970–2003) memorializes Los Angeles’s vernacular architecture, now largely overbuilt, the dissonance between nature and the incursion of commerce and popular culture is made evident in Andreas Gursky’s SH II (2014), in which a superhero sits alone in a desolate landscape.

Adam McEwen’s fictive obituary of the living American novelist Bret Easton Ellis (2007) is not a traditionally captured photograph, but a composite image made into a photographic print. In Monster Reborn (2002), Douglas Gordon presents himself in a Jekyll-and-Hyde photographic diptych; and, in the four-part Self Portrait of You + Me and Me + You + You + Me + Me + You (2011), he employs mirrors alongside photographs, so that artist and viewer can participate equally in the dual process of reflection and refraction.

Chris Burden documented his radical performances between 1971 and 1973 in silver gelatin prints and C-prints, collated into a single book with a hand-painted cover (1974). Each day of the exhibition’s run, a page of the book will be turned to display Burden’s iconoclastic images progressively. For her ongoing Black Square series (2006–), Taryn Simon shows objects, documents, and individuals within a black field that has precisely the same measurements as Kazimir Malevich’s 1915 Suprematist work of the same name. Black Square VII (2012) depicts the Picturephone, an artifact from the 1964 New York World’s Fair, while Black Square XX (2016) shows the ballot count for the European Union membership referendum, or Brexit vote, of the Inner London Borough of Haringey—a tally that went in the minority, with 24.3 percent voting “Leave,” and 75.4 percent “Remain.”

The central role of light in photography is also explored throughout the exhibition. Piero Golia captures the night sky above San Fernando Valley; Richard Phillips’s photorealistic portrait of a woman’s face is expertly painted in grayscale; and Dike Blair’s pensive still-life paintings give quiet, meditative pause and abstract form to otherwise unremarkable objects and details such as half-filled cups and desk edges. With Remembered Light, Untitled (Light on Wall and Bench) (2012), Sally Mann, in one of the many photographs she took of Cy Twombly’s Virginia studio over the course of their friendship, indicates the haptic processes that were part of his environment, while Twombly’s own images, such as Lemon (Gaeta) (2006), offer even more personal glimpses at the objects that populated his daily life. Even without the artist’s actual presence, the intimate photographs vividly evoke his human traces.