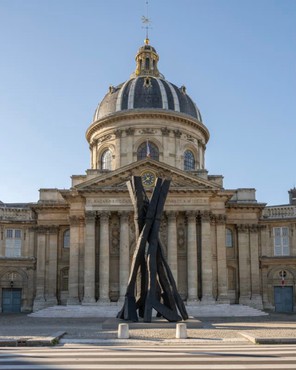 Georg Baselitz’s sculpture Zero Dom (2015/2021) is installed in front of the Académie des beaux-arts, Paris, in conjunction with the artist’s retrospective at the Centre Pompidou, which is on view through March 7, 2022, and in celebration of his admission into the Académie des beaux-arts as a foreign associate member. The 9-meter-high patinated bronze sculpture features a bundle of legs in high heels, a recurring motif in the artist’s work, which he sees as a form of self-portrait. 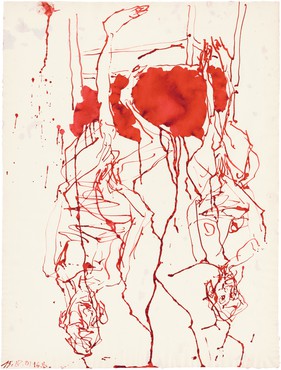 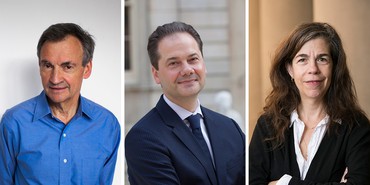 Join Gagosian for a conversation about Georg Baselitz with Max Hollein, Marina Kellen French Director at the Metropolitan Museum of Art, New York; Katy Siegel, Eugene V. and Clare E. Thaw Endowed Chair at Stony Brook University, New York, and senior curator at the Baltimore Museum of Art; and Richard Calvocoressi, art historian and director at Gagosian, London. In celebration of the forthcoming monograph on Baselitz written by Calvocoressi and published by Thames and Hudson, the trio will look at the artist’s prolific career. They will highlight the exhibitions Springtime at Gagosian, New York, and Archinto at the Museo di Palazzo Grimani, Venice, both opening in May 2021, and the recent gift by the artist and his wife, Elke Baselitz, of six landmark paintings to the Met, which are on view at the museum in Pivotal Turn through July 2021. Hollein curated the major traveling exhibition Georg Baselitz: The Heroes (2016–17) and authored the accompanying catalogue on this seminal body of work. Siegel wrote the insightful essay “Double Positive: Not for Not against Not Nein—Georg Baselitz,” published in the exhibition catalogue for Georg Baselitz: Back Then, in Between, and Today (2014–15) at Haus der Kunst, Munich. To join, register at eventbrite.com. 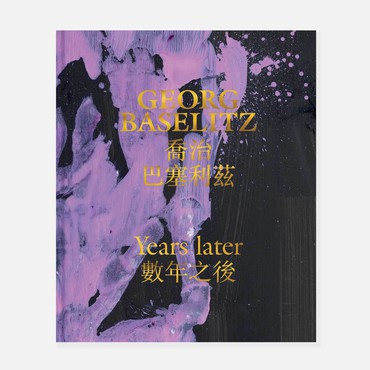 Georg Baselitz: Years later is available for online reading from May 18 through August 8 as part of the From the Library series. The book documents an exhibition of new paintings and works on paper by Baselitz opening at Gagosian in Hong Kong on May 21, the first show to open to the public within our international network of galleries since the global COVID-19 lockdown. The bilingual English-Chinese publication includes a foreword by Zeng Fanzhi and essay by Lu Mingjun.

See all Events for Georg Baselitz 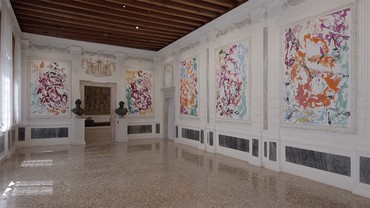 This video takes the viewer through Georg Baselitz: Archinto, an exhibition of new and recent paintings and sculptures by the artist at Museo di Palazzo Grimani, Venice, on view May 19, 2021–November 27, 2022. In this show, Baselitz pays homage to Venice and its rich artistic tradition, establishing art historical continuity while also signaling a rupture between the Renaissance portrait tradition and its contemporary equivalents. 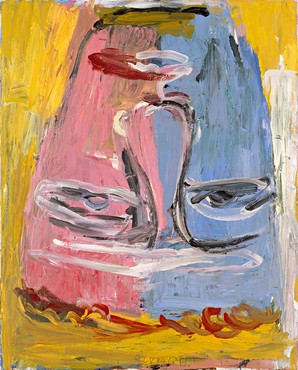 Georg Baselitz has donated six paintings to the Musee d’Art Moderne de Paris, which are now on view in the special exhibition Donation d’œuvres de Georg Baselitz, through January 9, 2022. The gift testifies to the museum’s ongoing relationship with the artist since his retrospective there in 1997, followed by his sculpture exhibition in 2011. 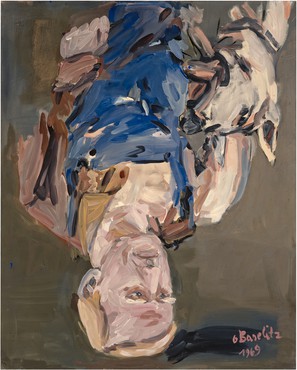 Georg Baselitz and his wife, Elke, have gifted six landmark paintings to the Metropolitan Museum of Art, New York, in honor of its 150th anniversary in 2020. These works are now on view at the museum in Georg Baselitz: Pivotal Turn through July 18, 2021. The portraits, made in 1969, are among the first that Baselitz created using the radical strategy of inversion, in which the pictorial motif is literally turned upside down, enabling the artist to focus on painting’s possibilities, rather than the image of the sitter in direct relationship to the viewer. These portraits of the artist’s friends and associates in the German art world—the journalist Martin G. Buttig, the gallerists Franz Dahlem and Michael Werner, and the collector Karl Rinn—are deeply personal and have remained in the artist’s collection for six decades. 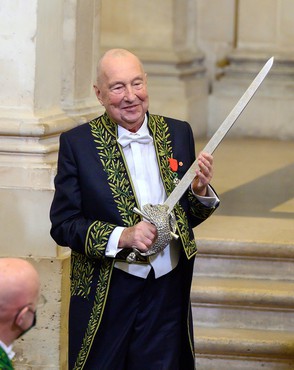 Dedicated to the fine arts, the Académie des Beaux-Arts encourages artistic creation and ensures the defense of France’s cultural heritage by awarding prizes to both emerging and recognized artists, organizing competitions, funding artist residencies, and granting aid to artistic projects, events, and associations. As an advisory body to the French public authorities, it is organized around the notion of multidisciplinarity, bringing together members within eight different artistic sections, foreign associate members, and corresponding members.

Georg Baselitz during his induction into the Académie des beaux-arts, Paris, 2021 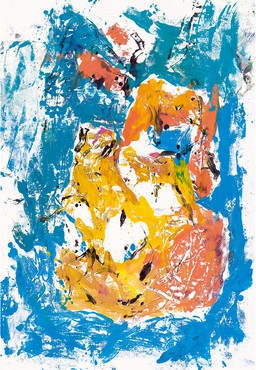 Archinto presents new and recent paintings and sculptures by Georg Baselitz. Installed on the piano nobile, the exhibition includes twelve paintings made expressly for the Sala del Portego, which hang on eighteenth-century stucco-framed panels where portraits of the Grimani family had been on display until the end of the nineteenth century. In this show, Baselitz pays homage to Venice and its rich artistic tradition, establishing art historical continuity while also signaling a rupture between the Renaissance portrait tradition and its contemporary equivalents. The exhibition is curated by Mario Codognato and organized by Venetian Heritage and Direzione regionale Musei Veneto, in association with Gagosian. 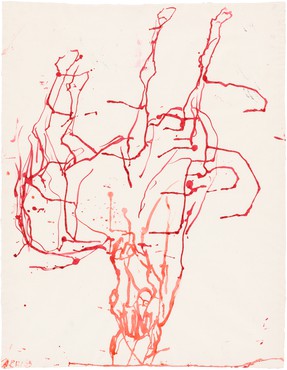 This exhibition, whose title translates to Carrying Schinkel to Athens, refers to the Greek roots of the Pomonatempel in Potsdam, Germany, a Neoclassical building designed by Karl Friedrich Schinkel. Installed in Schinkel’s building, which was built in 1800 as a tea pavilion and now hosts art exhibitions in the summer, are nine new works on paper by Georg Baselitz in frames based on Schinkel’s Greek revival design. 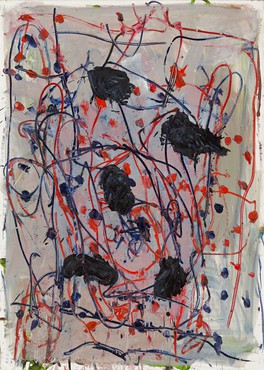 Donation d’œuvres de Georg Baselitz displays six landmark paintings gifted by the artist to the Musée d’Art Moderne de Paris. Each donated work represents an essential stage within Baselitz’s forty-year career: the tree, which was the subject of his first upside-down image; a “remix” of his 1962–63 painting, Die große Nacht im Eimer (The Big Night Down the Drain); several heads, a favorite subject of the artist from the outset; and finally, a work from the series dedicated to Sigmund Freud. 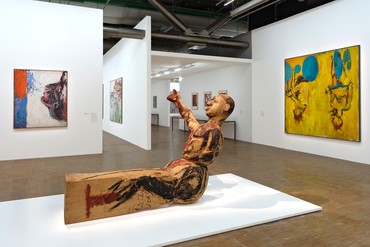 Wavering between figuration, abstraction, and a conceptual approach, Georg Baselitz’s powerful work is inextricably linked to the artist’s imagination and experience, illustrating the complexity of being a painter and an artist in postwar Germany. The exhibition brings together his work from the last six decades in chronological order, exploring his most striking creative periods, including the well-known Fracture paintings and the inverted figures of his iconic upside-down compositions. 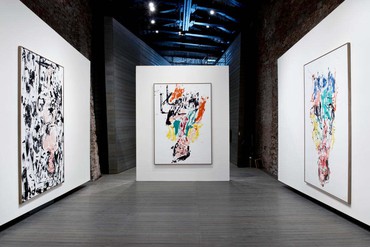 This exhibition of work by Georg Baselitz, whose title translates to Vedova, turn the light on, includes a series of paintings divided into two sequences. The first part consists of ten canvases dedicated to the artist’s wife, Elke, depicting her as ice cream. The second part comprises seven paintings dedicated to Emilio Vedova, which are, for the most part, monochrome or bicolored; their titles afford the public a glimpse into the relationship between the artist and his longtime friend. 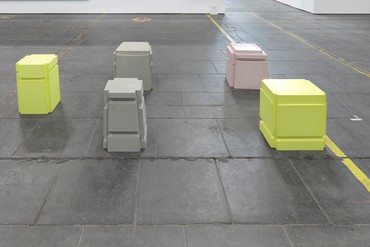 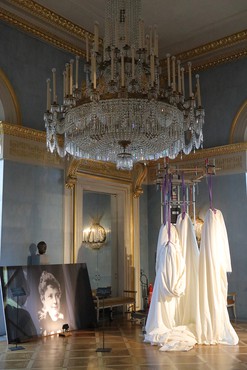 This exhibition visualizes significant productions, faces, and voices that have shaped the Bayerische Staatsoper, or the Bavarian State Opera, in Munich. Over the past thirteen years, writer and filmmaker Alexander Kluge has filmed the goings-on at the renowned opera house under Nikolaus Bachler’s directorship. Work by artists including Georg Baselitz and Katharina Grosse are presented alongside Kluge’s video works and bring the interaction of the arts to the center of attention in an unconventional way. 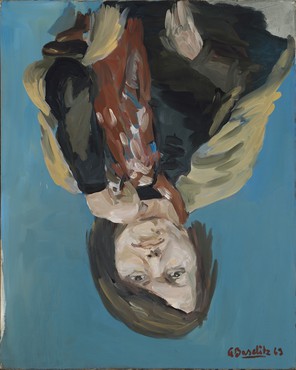 Georg Baselitz: Pivotal Turn displays six landmark paintings gifted by the artist to the Metropolitan Museum of Art in honor of its 150th anniversary. Made in 1969, they are among the first works in which Baselitz employed the strategy of inversion, an approach that continues to be of interest to him. The paintings mark a critical moment in the artist’s career as he sought to expunge narrative content and expression from his work in order to focus on painting itself.